No freedom for batteries

My car is 18 years old. It might burn oil, so I try to check the oil levels regularly. And that's a good thing! Looking for low oil levels, you might find other things worth knowing.

The last time I checked revealed a different defect on the car. The wire with which one opens the bonnet had  apparently rusted into place; trying to lift the lever resulted in this lever breaking off. Not good! And by sheer coincidence I had driven over a bumpy road too, thereby dislodging the exhaust, and pulled the rear view mirror off the windscreen. So instead of checking oil I went to the garage. And beside fixing the other issues, they lubricated the wire and replaced the lever. That should make checking for oil much easier!

Lubrication doesn't last, though; when trying to open the bonnet again the wire again resisted; I feared I would break off the new lever as well. I was about to meet Lionel so I decided to try again in his presence, as he is much more knowledgeable on cars than I am. He managed to open the bonnet without breaking the lever, opened the bonnet, and to my surprise said "your battery has slipped!" My battery slipped?

I looked too. The battery, which is supposed to be mounted on its little platform, was dangling in mid-air. Whatever had kept it mounted must have fallen off! I could imagine this could have ended badly. Toxic objects that can deliver powerful electric shocks should not move around freely. I'm glad we saw it before things went wrong. 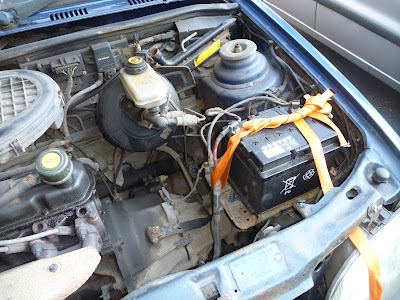 One assumes these holes in the battery's platform are supposed to hold bolts of some sort...
I didn't take a picture when we found it dangling, and I didn't want to re-enact the scene.

I happened to have a strap in my boot, and we provisionally fixed the battery in position. I think I have to make another trip to the garage... I can fix objects in position, but maybe I should let this be done by professionals. And then they can lubricate the bonnet wire again too!
Posted by Margot at 08:00