The lack of muddy, irresponsible behaviour as illustrated on this blog is getting out of hand! After a handful of blog posts filed with sun and dresses and sophisticated amusement this should have been the first on old-fashioned mud and defiance. But the gods didn't will it!

When we were walking from the car into the woods Dave muttered "I hope I can find it..." We hoped that too! We scurried and scampered like there was no tomorrow, ploughing through the brambles and stinging nettles and everything else that had seemingly turned the woodland into a tropical rain forest. Deer ran past, and Lionel even stumbled into an startled deer fawn. But no sign of the mine we sought.

During the search Lionel and Richard got a bit isolated from the rest. Surprise, surprise! Lionel often buggers off; if he's underground, it generally means he's going where the fun is. When he's above ground, though, it often isn't; too impatient to wait for those who know the way, he just runs off in a direction that seems to be a good idea. That way he sometimes does not end up underground at all. It even happened that nobody could get underground, because of this habit of his...


I had gotten too distracted taking pictures to keep track of where Lionel and Richard were. We did hear them shout at some point, but when we had gotten to where these shouts had come from we neither saw or heard any trace of them. We just went back to the cars, overseen by a buzzard who seemed to have an urgent message for us, but which we didn't understand. Maybe it mocked us for not finding the entrance.

Lionel and Richard had found it! When we were halfway down our pints in the pub afterwards they suddenly re-appeared. It seems to have been nice! So sometimes, evidently, Lionel's skittishness pays off. They told us there was much water in the mine. My favourite! We'll have to do that trip again. And then I'll stay close to Lionel. For that's where the fun is... even above ground, these days! 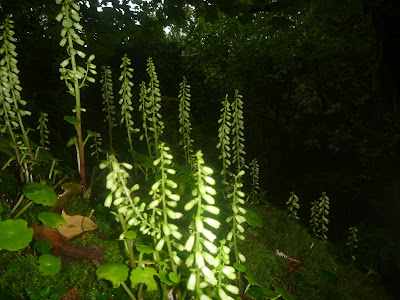