Technically speaking, this is a caving blog post. But we were underground with a fast-moving group, and I had forgotten to bring my tripod. These two factors lead to me not taking many pictures underground. And above ground, the scenery was stunning! So this blog post contains almost exclusively sunny, beachy pictures.

We wanted to visit some easy to reach mines; one of the guys was recovering from a broken arm, and didn't want to have to dangle from ropes. I thought we would just walk into to entrances, take a few pictures, and walk out again. But that was naive.

Were were only five, and a small dog; it has featured on this blog before. When we walked down to the beach to find the first entrance I was very glad I'd come. What a beautiful place! Especially in this weather. Unfortunately, the tide was too high to get to the entrance dry; I just decided to do it the wet way, and had some fun looking at the men trying to balance over the rocks, carrying the dog. We all made it! 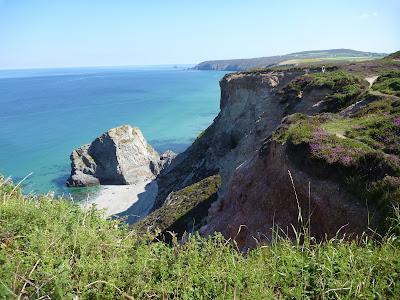 This is how the coast greeted us 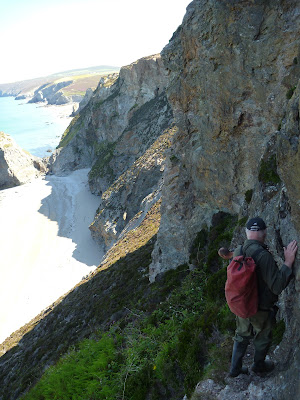 It's a steep path down. 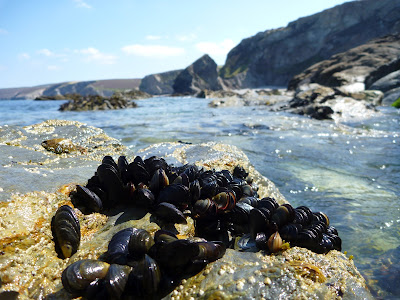 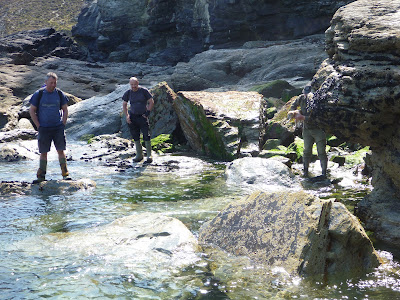 When will the tide drop enough? 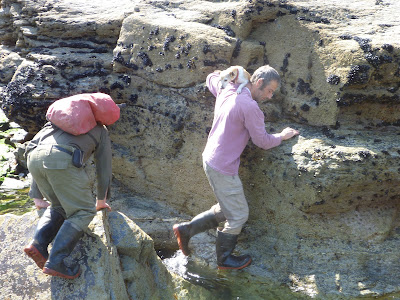 If you manage to clamber over the rock, with or without dog on your shoulders, you don't need to wait for the tide!

The mine entrance was inside a huge sea cave. The cave alone was worth visiting! And we hadn't seen nothing yet! The mine soon surprised us with a triple junction. And behind that triple junction more triple junctions. And places where you could climb up! Or slide down a hole! This was a veritable playground. I was a bit worried about the recently broken arm, but the chap was fine. We had a great time. Including the dog, who found all sorts of toys; a float in the sea cave, rocks everywhere, a stick in the entrance chamber, and even a 2 litre plastic bottle. Ever wondered how much noise a small dog makes when it plays football with a large empty bottle in an echoing space? No? Well, it is a lot!

The entrance, under an impressive cliff 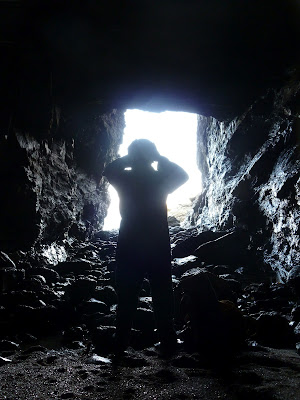 Once inside the sea cave it's time to put a helmet on and start exploring! 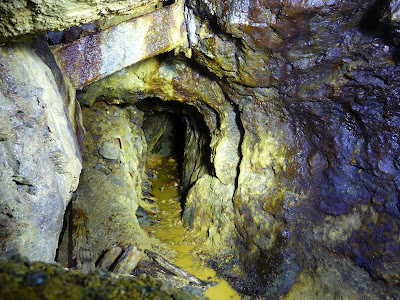 When we came out we had a sandwich in the sun. And then we went on to the second venue. We thought. It turned out we found a third; we passed small entrance, and had a look, as we were there anyway. Immediately behind the entrance there was a flooded winze; that had stopped everybody so far. But if they're flooded they're not so scary; I managed to scurry through it. That triggered one of the guys: he managed ta walk along the narrow edge. I walked on, and found a much scarier winze further on; I didn't want to cross that without a rope. That did it: now everybody wanted to see. The rope was first used to get everybody past the first winze, and then for ascending some climb. And completely ignored for the winze, that we all crossed like that. Shortly after the winze, the level came to a dead end, but we had had fun. 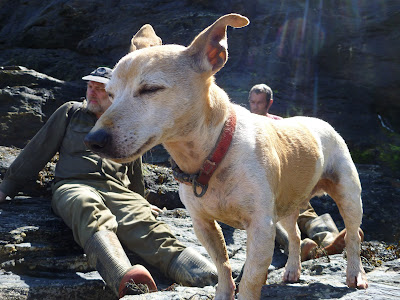 The dog has a Zen moment during lunch

Now it was really time to go to the, eh, second venue. This one had its entrance on a scree slope; not so scenic, and not so comfortable, but it was a pretty little mine and I'm glad we visited it. We walked over a sandy beach to a path up the cliff; we stood out a bit amid the more traditionally (un-)clad beach guests; especially me, in my caving overall and my helmet still on. (It took the role of sun glasses!) The whole walk up was another feast of photo opportunities. I might start to like beaches! It had been a splendid day! 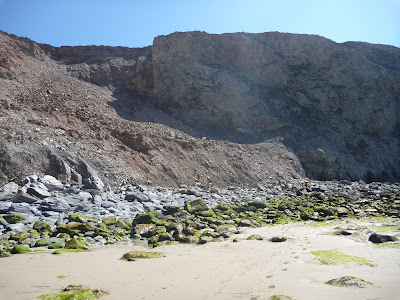 If you look closely you can see the entrance, in the shadow, about 1/3 from the left, more than halfway up the cliff, and the two little figures on the lower part of the scree slope 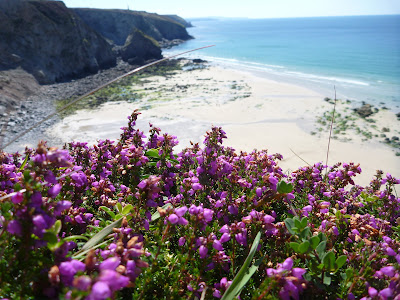 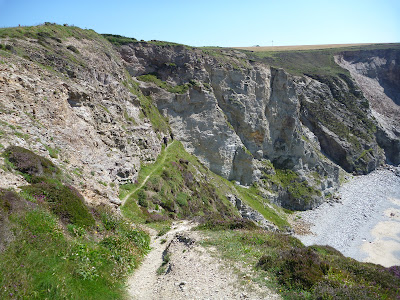 The charming cliff path we took to get back up