My third caving trip ever introduced me to several important phenomenons. One: waist-deep ochre. The epitome of splendid mine exploration! Second: Rick, the King of Squalor. Goes very well together with phenomenon one. And third: Morwellham Quay. It was where we teamed up; it was winter, and therefore dark at that hour. But one could make out the cobbled surfaces, the twee cottages, and the quay itself. And against the dark December sky I saw the silhouette of an impressive water wheel. I figured I should go back there!

That night, Rick took us down Wheal Russell. A nice change from his day job, which consists of taking tourists down George & Charlotte mine. Many trips, and all of them enjoyable, with Rick would follow. And I would explore many features of the Tamar Valley, but never Morwellham Quay. Every time I saw that name signposted I was reminded of my desire to go there. And then one day the time seemed right.

There had been a red weather alert. Flood warnings all over the Southwest! It meant: good weather for having a roof over your head (such as the ceiling of a mine tunnel); not too many visitors of Morwellham Quay, interesting river levels, and me being nice and fresh on a Saturday morning. With major flood warnings the Cave Rescue Team is standby; if the usual rescue teams (such as the fire brigade and Dartmoor Rescue) can't cope with the demand, they call upon us. So as soon as I got the message to stand by I stopped my intake of alcoholic beverages and spent the rest of the night reading about philosophy.

In the morning there still had been no call-out. As the rain had abated, the chance of a call-out had too. We chanced it. I drove Hugh (who is not in the rescue team, and therefore had had no reason at all to truncate his debauchery) to the Tamar; we looked at some of his sites, which were almost unrecognisable. I don't think I'll ever see the river that high! And having admired that, we went down to the Quay. 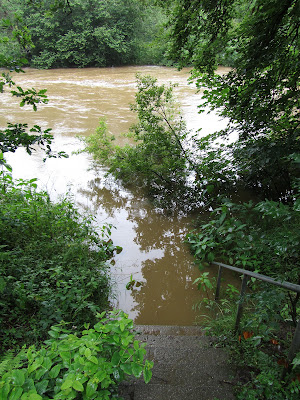 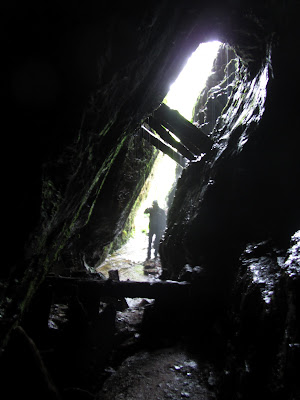 I couldn' resist walking some distance into Marquis Lode; there was enormously much water flowing out of this adit too.

There is a lot to see there; Morwellham Quay was a very busy port, to which all ores form the surrounding mines was taken, so it could be shipped. Apart from the quay itself there was the assayer's cottage, miners' cottages, workshops of the blacksmith, the cooper and whatnot, a school, and I'm not sure if that's original, but there are also shops and a farm. And a pub (that one is!). So we had a great time looking at all of this. And then the time came to go underground. 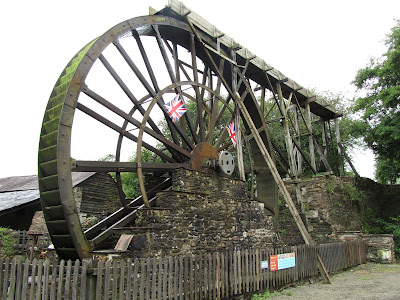 Now I could see the water wheel in daylight! 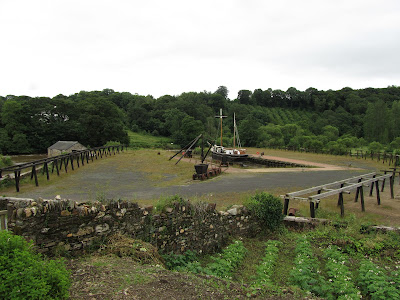 The quay with remnants of (reconstructed) raised railroads 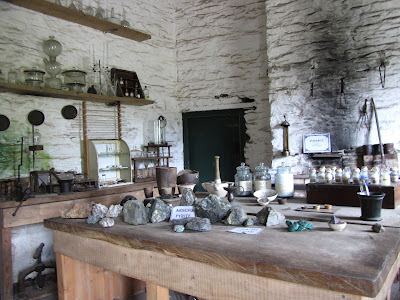 The inside of the assayer's cottage 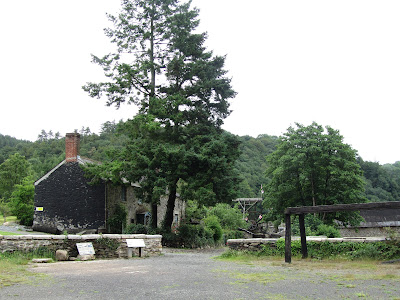 Water wheel in the distance, and cottage in the foreground. 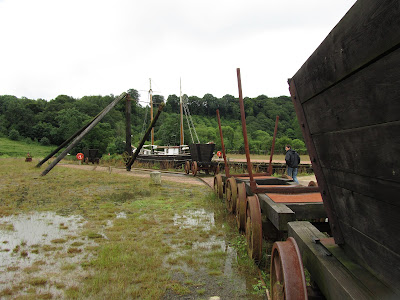 Carts on the wet quay

When we gathered at the "railway station" (one gets taken underground in a little train; not very historicaly correct, but it makes it quite accessible), and I thought I saw the shape of Rick there. But this man didn't have a beard! It turned out to be Rick anyway. He was surprised to see us. 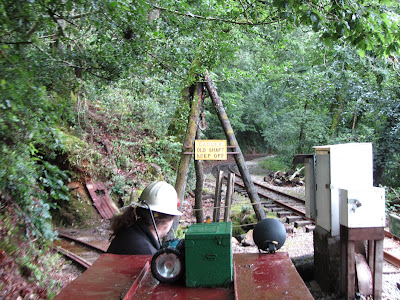 Old shaft - keep off; no, I want in! The train here turns left into the mine.

They have quite some evocative displays in there. It's not just a mine tunnel! Not as if that's not enough to keep me fascinated, though. There are many mannequins (as in, inanimate objects looking like miners; one searches in vain for catwalk modens down there) illustrating the work, and there even is a still functional water wheel. And we got to see Rick's spiel! 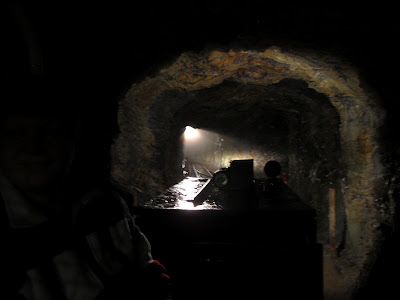 Not a very sharp picture, but it gives an idea of inside the mine! 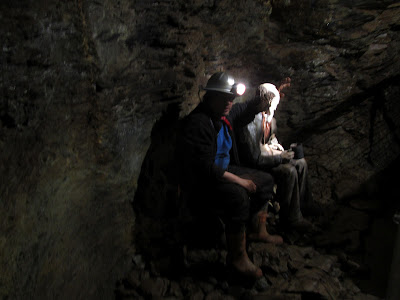 Rick teaming up with the mannequins for his educative speeches

It was nice to get an idea of what goes on there in that mine. Even though I prefer to propel myself, and get much muddier! But one can't have it all. We did get some bonus: after the train ride was doen we caught up with Rick a bit, when he got called to remove soem wooden beams from a stream. Every waterway in the surroundings was stretched to its limits on a day like this, and this one might burst its banks if it didn't lose its beams. And Rick invited us to help along... an offer we couldn't refuse. And in spite of Rick dropping a beam on my fingers and Hugh dropping one on my toes it was a nice way of finishing off our stay at this historic place. Finally I've been there! And I can recommend it...
Posted by Margot at 20:06