When the queen has something to celebrate, there is appreciation for rescuers! I'm not quite sure what the rationale is here; one would say you either appreciate your volunteers or you don't. And you don't only appreciate them when you've been in your current job for an X number of years. But this is England, and here many things aren't rational. So the queen had her diamond jubilee, and therefore the cave rescuers who had been in the team for 5 years or more got a medal. Illogical or not; I thought it would be a nice occasion, so I volunteered for being window-dressing for the ceremony. We non-receivers would give a demonstration of cave rescue for the audience!

It was a bit strange to prepare for this: we had been told the dress code was "smart/very smart". We were also told to wear our team fleeces. How on Earth do  you combine that? I gave it a shot by wearing a dress that goes well with the team fleece colours. It looked like this: (apologies for the dirty mirror).

The glamour of the dress was further compromised by the very large bag I had to lug around; I had to, of course, bring my caving kit too. So when we arrived  at Kents Cavern, the venue for the night, I clic-clacced my heavy bag to the entrance, stared at by my colleagues who had never seen me look like this, and was told to immediately change. Oh, OK! So I dashed to the ladies' room and came out in a more reassuring outfit. Us non-medalists were sprinkled around in the cave: two here with a stretcher, two there with a Little Dragon, and Bernard and me somewhere with a Heyphone. The officials, team members and their guests would be lead past us in three groups. Bernard and I were supposed to demonstrate contact between scene of accident and surface. 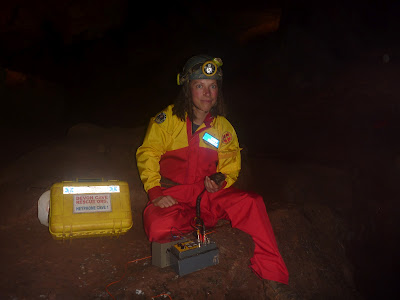 Me with the heyphone. The team even made sure they had a rescue overall for me; so far I'd been training in my own!

The heyphone was set up already. We tried to make contact, and Bernard (who was hidden somewhere, pretending to be at the surface) could hear me well, but I couldn't make out anything he said. And as the groups could start arriving any moment I did not want to faff with the antennae. So we ended up demonstrating that communications underground can be difficult!

Between groups 1 and 2 we did relocate the antennae, and that solved the problem. We were most illustrative! And we took turns being the surface.

When the third group was gone we quickly packed up, had another attempt at the world record speed-changing, and got back to the cave entrance. I was just in time to hear some of the speech of the Lord Lieutenant who was awarding the medals. Many of our men got one, and I was vicariously proud. Several already had a medal from the golden jubilee! 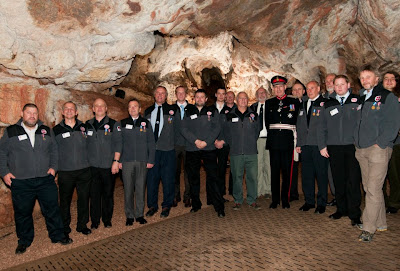 All medallists, and the Lord Lieutenant. Blog readers will recognise Dave (far left) and probably fail to recognise Rick (far right); the latter shaved for the occasion... 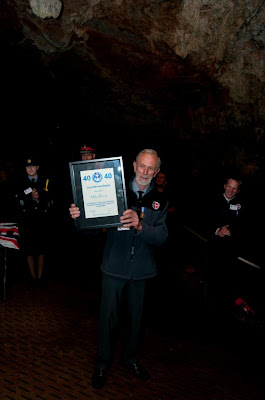 Mike, founding member of the team, with his certificate!

When the medals had all changed hands it was time for some long service certificates. One of the team members had already served for 47 or 48 years! And he's still going strong. And the plan is to give out such certificates a bit more often (this had been the first time), and not wait for the queen to take initiative. I think that's a good plan! We're not needed very often, but if we are, those in need really benefit from a well-trained team. And a framed piece of paper might help make people feel appreciated for making that effort!
Posted by Margot at 12:13

Jack got one of these too, but they just handed them to them when they were at work, eating thier lunch or whatever. A little ceramoany is very nice.

That's indeed not the same! I don't think that would make the medallists feel half as appreciated. If the queen makes it to her 75th anniversary she should make sure an effort is made that time!