Austerity in the lab

Things are the way they should be. People have the job they have because they are the most suitable person for the position. People always have the time to rehearse their presentations, be it a play, a concert, a lecture, or whatever, to perfection before the actual performance. Cities, buildings and processes are designed to optimally meet their requirements. Right?
I sometimes catch myself thinking such things. I think everybody does. And children are probably worse. In this sort of world view, laboratories are probably places where highly intelligent, serious, and meticulous people perform their sophisticated science. Dressed in lab coats, wearing glasses, not distracted from their vital work by anything at all. In case of our micropalaeontology lab that's really the case. Almost.
The state of the lab fluctuates somewhat. When one lab technician went on maternity leave, and we had a temporary replacement, the difference was huge. But recently some perhaps more permanent changes have taken place. The first may have had something to do with a Tuesday, on which the organising of the caving trip of that evening turned out a bit tricky, due to a relevant person in the organisational chain that performed in a way I find somewhat lacking. And as it was, I did not restrict myself to silently contemplating that judgement; the language that gambolled through the lab in relation to that event might not have been the most civilised ever. And only a short while later we had a swear box in the lab. Utilising such language is now not without financial consequence! 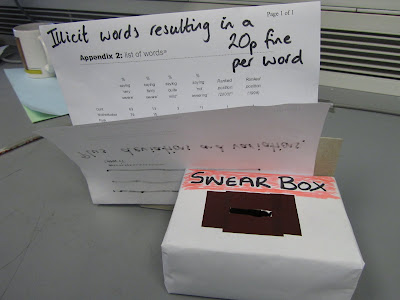 Weeks later the lab technicians found evidence of food being consumed in the lab, and they tightened the reigns concerning the adherence to lab protocol in such (and other) matters. I admit I consume in the lab; there's water everywhere in the lab, and in the lab downstairs it's explicitly allowed to drink water, so I often microscope away with a 1 litre flask of hot water next to me. And being a proper caffeine junkie I got tempted into more liberal behaviour; I would often have coffee next to my microscope as well. But no more. Not even water. I don't like this rule, but I figure appealing against it would take years.
As I cannot possibly work without the intake of gallons of liquids I decided to reside on the border of what's allowed; there's a trolley just outside the lab, in the corridor. I just keep my coffee or water there, and do lots of walking to and fro... the trolley is now known as "Margot's coffee bar". Where I legally get my kicks, while uttering nothing  but acceptable language, due to the conditioning as provided by the swear box! And wearing lab coat and sensible footwear if required. As everybody else. So the lab is now as close to the cliché of a lab as it has been in a while! 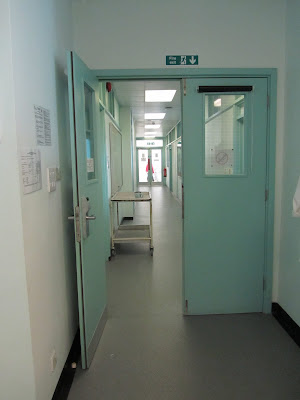