No trip for me on Tuesday. No trips planned underground in the weekend. What’s wrong with this picture?

One of our more enthusiastic underground photographers, John, had come up with a list of things he still wanted to do on some forgotten day. Lionel is always up for some mischief as well. So on a Friday afternoon I mailed these men to find out if this weekend would be one for getting one of these off the to do list. And John took the bait!

We decided to go back to Philips Adit; we’d had a club trip there, but with very many people, and that had made it difficult to take pictures. So we went back with just the two of us. And our camera gear.

On a sunny Saturday afternoon two cars parked on some forest track, and out came two nutters that hauled themselves into waders and wetsuits, to then venture into the woods. As one does.

My first observation was that my ankle did not like my caving boots. It hurt! As long as I wear shoes that do not reach to the ankle I’m fine, but my caving boots touch that region, and touch evidently is too much. But what can one do.

My second observation was that we both seemed to have forgotten where the entrance is. Which is unfortunate if you’re prancing around in gear that is quite fine for cold water, but you’re actually in summery woodland. At some point John lost me; that was due to me finding a large enough pool to lie down in to avoid hyperthermia.

In the end John found the entrance after all. Splendid! Inside it was much cooler. The water was so cold I decided to wear my neoprene gloves as well; it made me feel like catwoman. Or rather, some Bond girl; John is nicknamed James Bond so that fit quite well. Normally I am dressed in baggy colourful kit underground; now it was all skin-tight black...

And soon it was a trip down memory lane; we found the “uitgang” with an arrow Lionel had written on the wall the previous time. And once out of the adit and inside the stope the photography could begin. 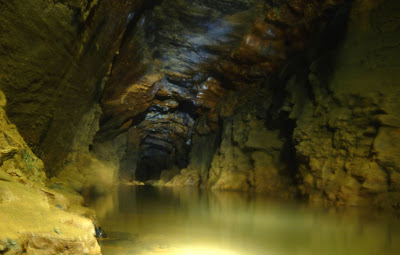 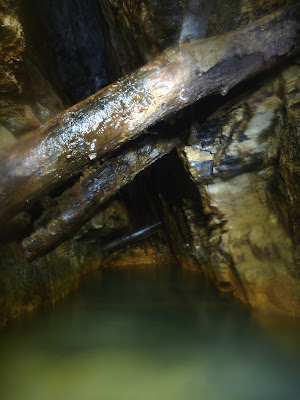 The first, low part of the stope, with pretty timbers 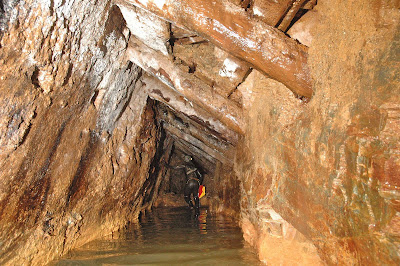 Timbers with me for scale. Pic by John
It wasn’t my best day; I had water on the lens, I moved the camera, I dangled things in front of the lens; all of it. But some pictures didn’t turn out OK, and it was nice to just give it a try without people getting either in the way or impatient. 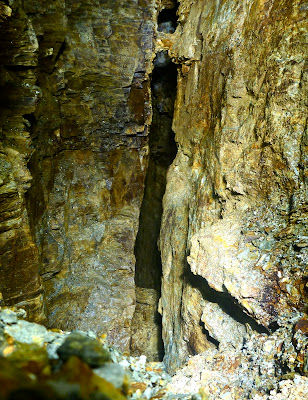 After the first part the stope becomes very narrow and high, and thereby very pretty, but hard to take pictures of. 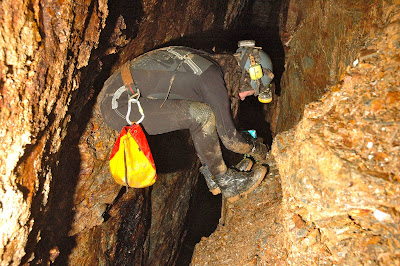 Here I've scurried a bit up, in order to reach a ledge I could mount the camera on. Or in other words: what not to do with a wetsuit. Pic by John

These are the compiled pictures I took from up there. The picture of me under the timbers gives an idea of scale.
I don’t know how long we were down there, but it was fun! When we were done I got into the Tamar to wash the ochre out of my neoprene socks, and then we called it a day. Nice small-scale improvised underground stuff! Not bad! 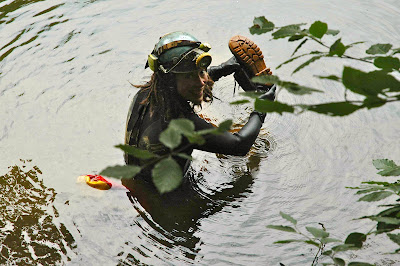 Me tending to my personal hygiene in the Tamar. Pic by John
Posted by Margot at 08:35