Yet another rescue training

These casualties of today are not what they used to be. They can’t be asked to give up! Even with broken ribs and a broken ankle they’ll happily hop out of a slippery cave without help. What’s the use.

We had another full-scale rescue practice, aimed at trying out our new tripod. If you have to hoist someone out of a cave or mine shaft it can be useful to have some construction, preferably above the shaft, to attach the rope to. We used to have an improvised device, but fortune smiled upon is and now we had the real deal. But we’d better make sure we know how to use it!

We sent Julian, a friend of one of the rescuers, down to go and assume a victim-worthy position anywhere in Baker’s pit. A while later we followed.

We were divided in three search parties, and mine went places I had never seen before. The good thing of rescue is that you really explore every nook and cranny of the place the victim hides somewhere. What I didn’t like too much was that soon I bumped my head, which in itself is part of the game, but this time it knocked out my light. One needs light!

One's view for quite some of the time 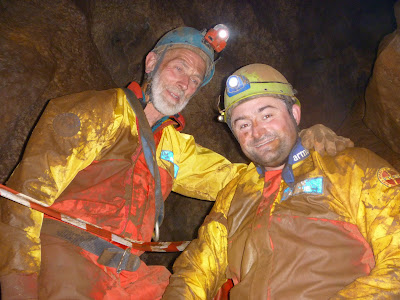 My team mates for the day; Mike, a founding father of DCRO, and Jason
By the light of my spare lamp we searched on until we heard Lionel; the victim had been found! He had, indeed, broken ribs and a broken ankle, so at the surface they erected the tripod, and sent someone down with a stretcher. This chap got temporarily lost, and in the meantime the casualty convinced us he didn’t need it anyway. He happily scurried closer to the entrance, until ground control interfered and pointed out that the casualty should not be so bloody vital and just accept being stretchered. We needed to try that tripod! 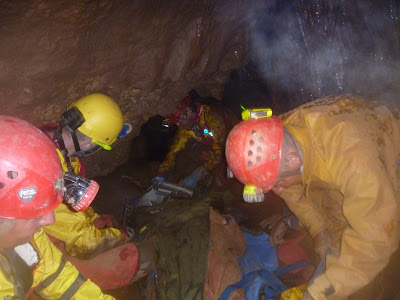 The victim has no choice: he'll have to get into that stretcher!
Communications, by the way, were maintained using field telephones. Our heyphones were in such a state of dilapidation they would be a burden. And these field telephones have the disadvantage you need to roll out a cable, but it was worth it. They looked like they had been in use since WWI (maybe they were!) but they worked like a dream. You wind them up a bit to get some power, which makes a strange noise on the other side, so they know you’re about to say something. And the signal is clear. You can even talk at the same
time! 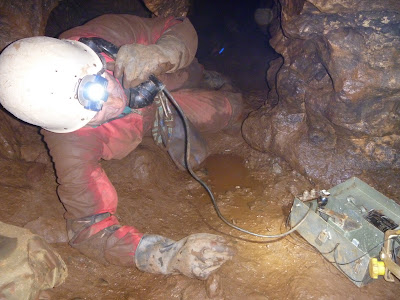 Keith with one of the marvellous field telephones
In a jiffy we got the victim where he belonged, and slid him to the shaft. This would be what it was all about. The problem is that it’s actually two shafts, offset by about a meter. But we got him up without problems. I noticed that glacier training is quite useful in cave rescue, and vice versa; the ropework is similar. We did notice the tripod is too low to lift a victim clear from the shaft; the last bit has to be done by strong people balancing on the edge of the shaft. But we can do that. The victim had had a blast! He might very well join us... 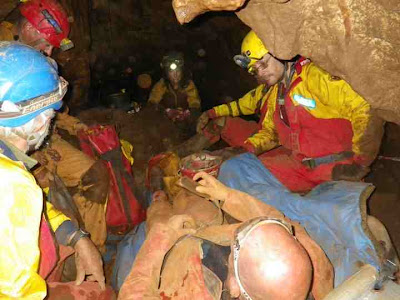 Rescuers and victim have a break while we await something to arrive from the surface. Pic by Paul 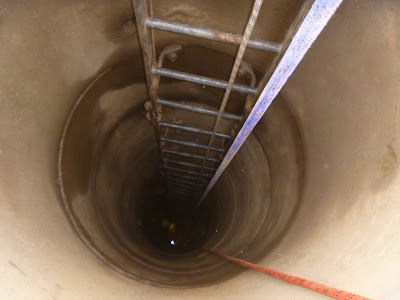 The upper shaft we had to haul the victim through. This was my view for a while while I relayed the commando's of "Haul on blue!" and "Stop!" from below to the haulers. 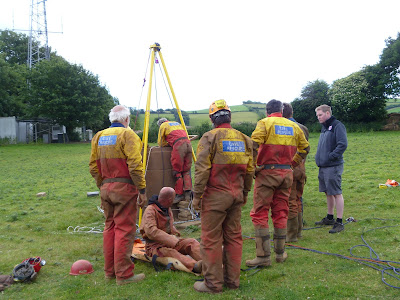 The victim is out, and is getting out of the stretcher. Notice the shiny new tripod!
This time we got an extra beer after the practice; our rescue coordinator had turned 50, and had organised a bbq in a nearby pub. Good to have a beer afterwards with the victim and a festive bunch!
And for blog readers there’s a present too; I accidentally saw that on the DCRO website there’s a video of an earlier rescue at the same venue, filmed by BBC’s countryfile! That was done before my time, but I recognise most faces, and not much has changed (except for the tripod). Enjoy!