It was good I had a camera with me, as otherwise people might not believe me. It was a sunny summer day and I was on a beach. Not with the intention of going underground from that beach; no! With the intention to do happy sunny beachy things with cheerful people. Really.

I blame Catholicism. Federico has a penchant for frivolously dragging people off to sunny beaches and being merry, and I had succumbed to that temptation a few times already, but this was definitely the epitome of his victory over Calvinism. We were going surfing!

We had gathered at my place. Federico had ensnared his wife, his younger brother, Jon, and me. Just too much for one car, so we went in two; a proper gender divide was created, as Ella joined me. As she declared being navigationally challenged we decided I would just follow the car with all the blokes.

All went well until Jon showed an utter disregard for a lane indicating it lead to our destination. Ella phoned Federico, who, after some routine dismissal of criticism on their directional decisions, managed to acknowledge maybe something was amiss. We pulled over and found out Jon was practically on his way to Penzance instead of Polzeath. Why am I following that chap?

After some more traffic antics, including 750 degrees on a roundabout, we reached our destination after all. Only recently I had been so near, but yet so far away (ah!); then I was doing what in my world is so much more conventional, and vanished underground.

Soon we had rented wetsuits and surf boards and body boards. There wasn’t much surf, so Federico, the leading surf god, figured full size surf boards would be a bit much, but I wanted one anyway. And after some wetsuit faffing (they don’t seem to cater for tall, skinny people like Fede’s brother), and car key fondling (where do you put these when wearing a wetsuit? The answer is: attached to a loop in the back of my suit) we were on our way to the water! I didn’t get to carry the big surf board; Jon’s masculinity and chivalry didn’t allow that configuration, and I got to carry his purple body board with happy orange fish. 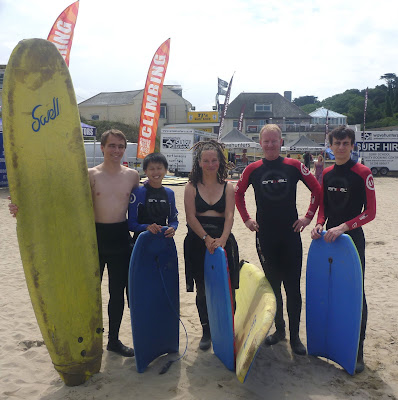 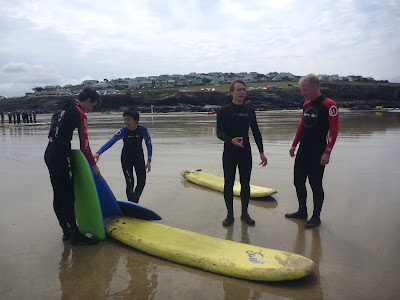 At the water side Jon gave me a 30 second surf lesson and off we were. The sea is divided into a surf board area and a body board area (probably because of the reputation of surfers to crash into anything that doesn’t get out of the way quickly enough), so we had to split. And then my surfing career began!

There weren’t many waves, but those that were granted us gave me a taste of why this is fun anyway. My timing is pretty crap, but I got to stand up quite a number of times anyway, and I was quite proud. And indeed, it is fun to be pushed along at great speed (or so it seemed) by a wave! My attempts at documenting all this with my faithful camera were not very successful, though. 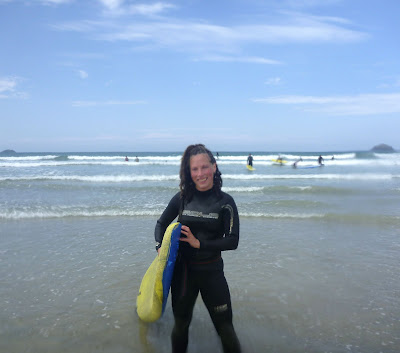 Maybe the belay belt isn't really surf babe kit, but I needed something to tuck my camera behind...
After a while I noticed some bored-looking shapes on the beach. Maybe this meant it was time to redistribute ourselves over the surf- and body boards! Jon and I joined what indeed were Federico, Ella and Gabrieli; the latter two already shaking with cold. Ella had had enough of hypothermia and went to get her clothes, but Gabrieli wasn’t impressed by his own shivering and wanted to try a surf board. Nobody else wanted that, so I could just go back to my surf babe exploits. Over time, though, my eyes got somewhat irritated by the salty water, and my companion wasn’t getting any warmer, so after a while we came out, and together went to the higher beach, where we decided we might as well have lunch.

Romping in the sea I had had fun, but now I was sitting idly on a beach, surrounded by beach people, and dressed in a bikini (too cold) and a wetsuit (too warm). This was really challenging my Calvinistic spirit. It was nice to just have a leisurely chat with my splendid companions, but this shouldn’t last forever. Federico didn’t suffer from any unrest; he just had a nap. He’s that kind of guy. But at some point I decided to split, and Ella decided to come with me. The men stayed, hoping the wind and thereby the surf would pick up (which it actually would). By Cornish standards I’m evidently nowhere near a proper beach babe yet, but my own standards have collapsed! And the worst thing is: I want to do it again...
Posted by Margot at 18:07