Tired of caves yet?

Most things stop at christmas, only to restart in January. But not the caving group! Dave deemed it a good time for a photo trip. Not very physically demanding, but it does, of course, lead to lots of pictures. I promise to produce some pictures of other things soon! My blog is starting to become a bit of an auxiliary PCG site. 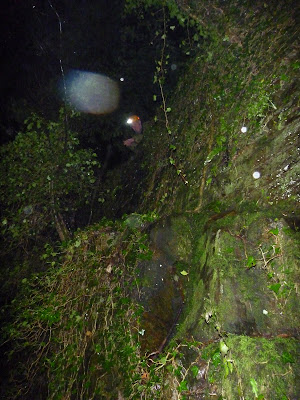 Finbar and the wall
Anyway. We drove to Gunnislake, changed, and thought Finbar, one of the more experienced cavers, who pointed down a serious wall and said that was where we had to go, was joking. He wasn't. And waders are suboptimal for wall climbing, but it turned out to be fairly straightforward. And in we went! This time taking pictures of any mineral we wanted. Next time I bring a torch, for it's photographically unpleasant to have your light source on top of your head when you try to take a flashless picture. 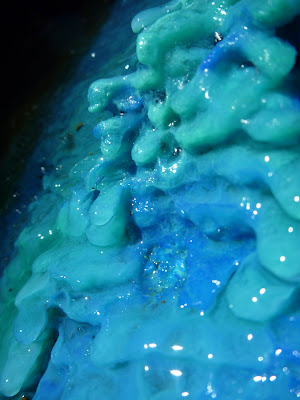 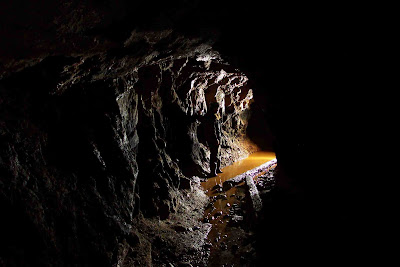 I thought the other mine was on walking distance from the first, but that was proven wrong. We went back to the car and waited for Dave to lead the way. A bit of a strange drive, as the car behind me was erratically switching between parking light and full beam. It looked like they were signalling something... but later it turned out to be a technical problem. 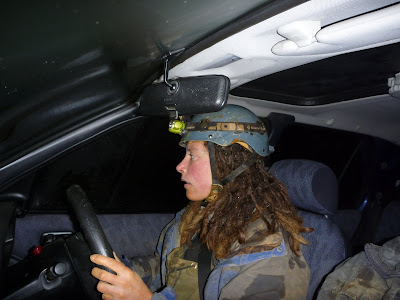 Neil thought it was hilarious I drove with waders and helmet-with-headlight on
The other mine had a nice old-fashioned low and flooded entrance. Further on it was much easier to navigate, and from time to time decorated by nice coppery dripstone, and flooded shafts down. There also was a shaft up! The powerful pull! Must climb ladder must. But without a slave flash you don't achieve very much. But it was fun. Dave went wild with no fewer than three flashes, occasionally equipped with a colour filter. A caver that was new to me; Sam, and I ventured a bit into another vertical shaft without a ladder, but to my surprise I did not go as far as he did. I'm sensible and responsible! At least, it could be worse. No pics there though, as Dave's flashes were busy elsewhere. 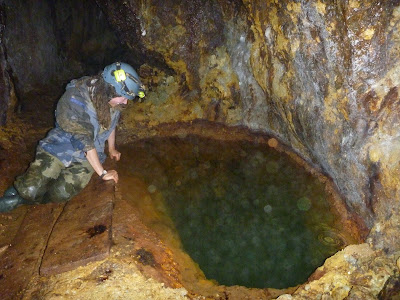 One of the flooded shafts... 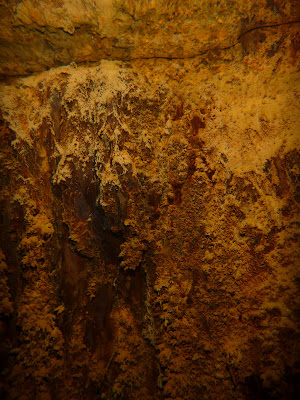 ...in which I took my first underwater picture ever! 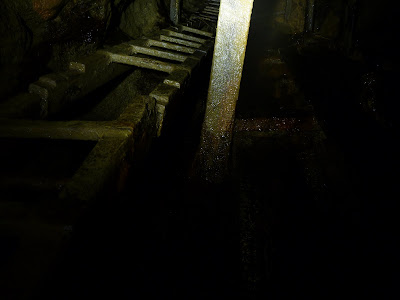 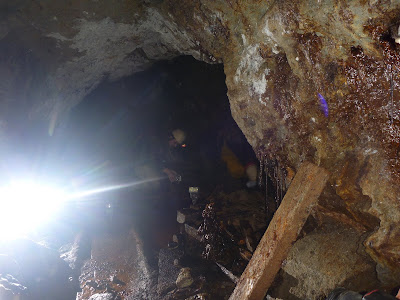 I kept on triggering Dave's flashes- they react to any camera.
At some point it had been enough, and we drove to the nearest pub for a poofy German drink (or, in the case of the other cavers, a drink of a different nature) for some afterfun. Next week I won't be joining the trip, but I have enough pics to keep myself busy. 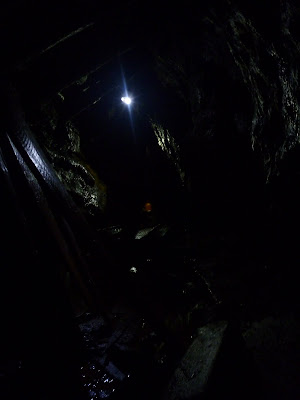 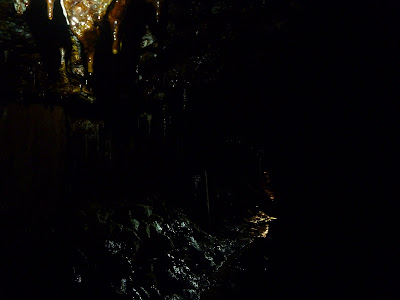