Lots of culture to be enjoyed is good! And there are many possibilities here in Plymouth. But only culture still leaves something to be desired. What improves most pleasures in life? Indeed: Germans!

Any research institute that takes itself seriously has Germans. And that's a good thing. Imagine life without them. That would be boring and difficult! And so far everywhere I went there always has been a steady supply. In Amsterdam, on the Marion Dufresne, in Cambridge, in Tromsø... but here things looked bleak. We had Veit, but he went off to become a serious ogling-the-EU-from-the-outside scientist in Germany. And theoretically we had Till, some private-security-scientist, but he was abroad. People spoke highly of his cultural interests. And his readiness to share these with likeminded folks! So I looked forward to his return.

And return he did. The first thing I did was invite him along to Hiroshima Mon Amour. And he accepted! So on a warm october night we did not have to go far to enjoy this icon. It was shown on the campus. Free of charge to those affiliated with the university. The newest flashiest building here houses what is called "peninsula arts", and they provide movies, music, dance, lectures, whatnot... lots of interesting stuff! My job requires me to restlessly run all around Europe, and soon enough also beyond, but in the intervals I have here I don't have to be bored. 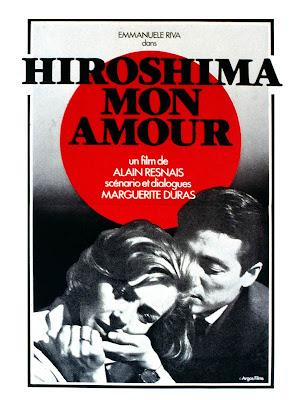 And I also discovered a psychological German in the restaurant. Who knows, maybe he could be convinced to lighten up life when Till runs away to his faraway field area, which is rather imminent.

And here I know there's some long distance Germans with whom I can share my thoughts! Maybe some even have seen the movie too. It's one of those that has to sink in! A strange blend of petty human weakness and greater thoughts. And a portrait of a time that for me already is history.