These Brits have one things well figured out: tea! It is completely socially acceptable to drink buckets of it. Every day. I like.

And it's everywhere! Dave, the half sea level and half human geography PhD student, once asked Veit if he wanted to go and have a brew. A brew, that sounds like stuff from a brewery, so Veit the German thought he was invited for a beer. But no, a brew is tea! It brews.
Maria gave me tea for my housewarming party, and it came in a package that both illustrates the above, and features a figurine with which I have no difficulty at all identifying. 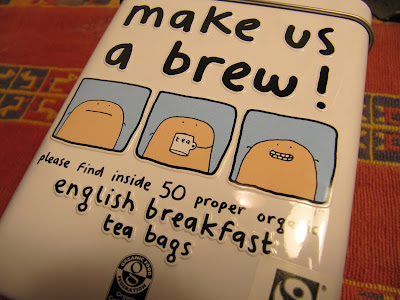 Today I've been invited to Louise's for tea. Does that mean she'll make me tea? Probably, though that's not really the point. Tea is dinner. That's one of these things in which the Dutch are above average sensible on a European scale: we invite people over for food. And then we give them food. The English invite them for tea, and then they mean food. The Norwegians invite them for "midday", but it won't be at the middle of the day, and they, again, mean food. Confusing! 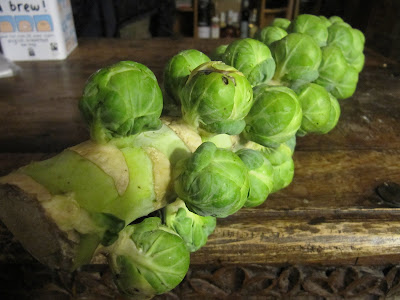 What I had for "tea" yesterday: brussels sprouts! Sold in a way I had never seen in the Netherlands. And that while we identify with them (or their smell) so much!

Louise by the way is a strange Brit: she does not drink tea. At all. Rob and Wil were more classic Brits: when all the local supermarkets only sold fruit tea and green tea and herbal tea and all sorts of things a Brit does not recognise as tea you could see them get restless...

So far I havent't been thrown out of the country for drinking most of my hot water without having put a tea bag in... but who knows, maybe two years is enough to convert from hot water to a proper brew! And maybe by then I'll also routinely refer do dinner as "tea"...