It's good to have a solid social life. And a social life is boosted by giving a party. So I did! A housewarming. The house was finished enough for it. I invited everybody I had spent more than 3 minutes chatting with. And I decided to open the doors at 6 for the early people.
The clock struck six and Louise was on the intercom. First guest! She brought Mehmet, another PhD student. And a while later Roland's entire family came in. Rosa's first party! She stayed well beyond her bedtime. 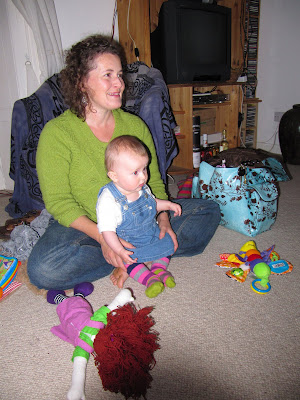 Maria and Rosa, two of the first guests 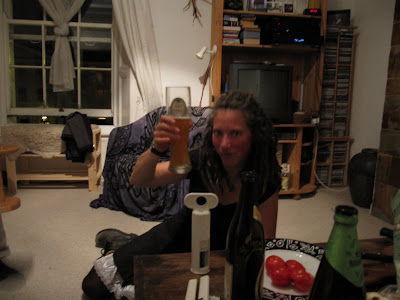 A bit later suddenly the house exploded with later guests. They all came with much more food and booze than seemed reasonable! But that's good in a way, parties need not be reasonable and immaculately organised. In the meantime Roland took on the job of DJ. The neighbours had been warned. 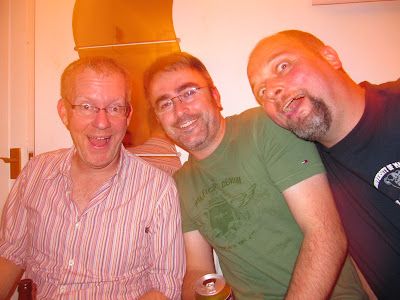 A plethora of professoral dignity (Little Jon on the left) enveloping a hapless historian
At around that time the party turned into one of those that has people chatting away in the kitchen, being at a loss for a place to put down their beer bottle, and other people taking questionable pictures of themselves and each other in the living room. A real party, in other words. 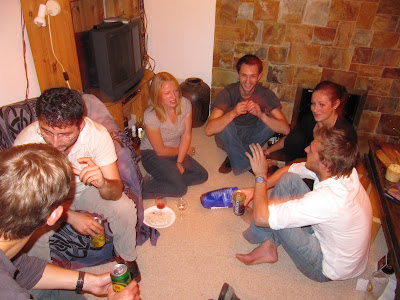 The "junior" side of the party: a hoard of PhD students (or until recently PhD student: Jessie, just left of the middle, is finished.) Duncan, in the far right, just started this week. Against the wall a face that most likely will appear here more often: Rob, our own sea level PhD, flanked by "the mrs". 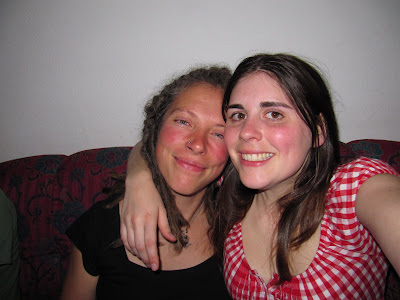 Around midnight it had been enough. Cabs lined up in front of the house: Brits don't come by bike. And I was left trying to fit all the uneaten foods into the fridge before retiring to bed. I think it was a success!
Posted by Margot at 16:13

Oh that made me miss Plymouth :-(. Shame that I couldn't make it!

(I don't understand this Dutch, I just deleted my message many times!).

Yes, I missed you! You should come by some day. But you will settle in soon enough in Exeter to such extent that you'll wonder how you ever could miss PLymouth!