N=2, r2=1. Salt marsh fieldwork means getting up early! So far. My alarm went off 4.45, and 5.45 I arrived at the university, rather sweaty and smelly due to the large bag. In the dark an even darker shadow loomed: the rental car. By 6 we moved, and without any problems we made it to the ferry, which left Portsmouth at 11. And late in the afternoon we were already at the Isle of Wight. Which is several kilometres ahead. Amazing progress! We spent several hours cruising around, searching for someone who allegedly had fallen out of a kayak. Fruitlessly.
The boat just speeded up after the searching was abandoned, and while I slept like a log we sped towards Spain, where we arrived in the drizzle. And then the epic road trip from northern Spain to southern Portugal kicked off. The weather got warmer and dryer soon. We drove over quiet highways. I had a try too. Not very difficult, really! We had a British car, so you don’t have the view you normally have, but these Spanish roads are rather uneventful. And not everybody speeds, so you even get to overtake people. Late in the day, though, I had to negotiate some elusive roundabouts, with two men telling me where to go in ways I did not always found very straightforward, which went wrong, and after some of these issues I got so stressed I stalled the engine repeatedly at the only busy roundabout in the far surroundings. Wil took over, and drove us to a campsite we found on the satnav. Just before dark we pitched the tents. Rob chose to sleep in the car. Something he reconsidered after triggering the alarm 3 times in a row. 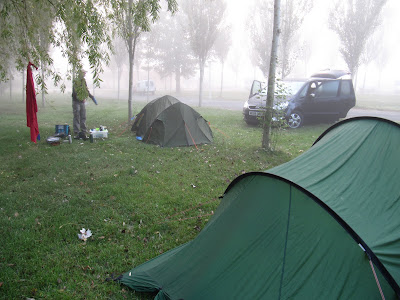 I expected to boil out of the tent early in the morning. But no! I woke up in a fog cloud. Wil made coffee, we packed our stuff, and off we went. Drove out of the fog and into the sun. We had breakfast at some restaurant near the road. Good coffee, good toast, in the sun. Now that’s the life. Rob, better known as Tigger by then, enjoyed the playground. And the onwards. 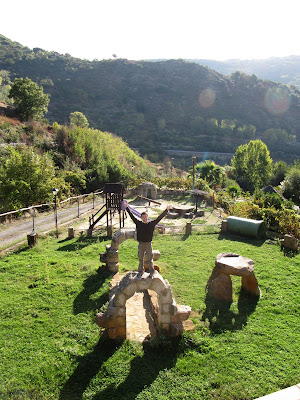 Thanks to the description of the landlord we found the rented accommodation. I was immediately pleased: it had a charming tomcat lingering around in the near neighbourhood. He was in for a flirt. As soon as we acquired the keys we concluded it was a nice place, and we distributed the bedrooms. The orange one for me! We unloaded the car; it is hard to believe how much junk one may need for a saltmarsh fieldwork. Coring equipment, 2 sets of surveying equipment, boxes full of sample pots, surface sample cutters, trowels, measuring tapes, radios, gloves, and who knows what more. We then run through a supermarket, had a sandwich, and off we went to Faro. Rob stayed behind to cook supper, while Wil and I went to pick up Emily, the last-minute research student. We were somewhat late, and the satnav sent us over the obscurest inland roads, and Wil didn’t want to keep the lady waiting so he kicked our Galaxy through inland Portugal at breakneck speed. We survived, and shortly after ten in the night we we all together, seated for an amazing dinner concocted by Rob the Chef. And then it was really time for bed.
The first day in the field we first set off to look for some benchmarky towery thingamajigs that would aid our surveying. Did not find them though. Then off to the marsh! We found a reasonable looking path, clambered down, gooed around to the marsh, and had a look around. A hot marsh! Literally. As this marsh looked fondled with we had a look around at some neighbouring ones too. The river, Rio Mira, is littered with them. 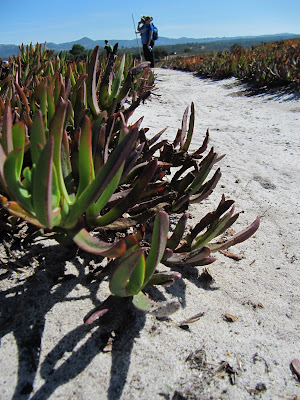 A general impression of the surroundings, with strolling scientists 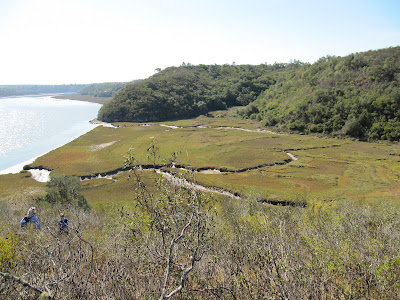 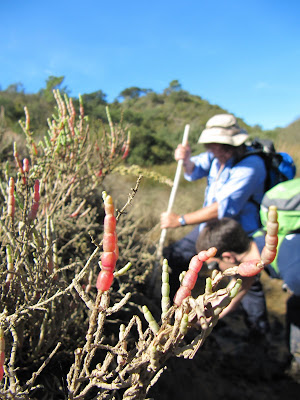 Rooting around to get a first impression 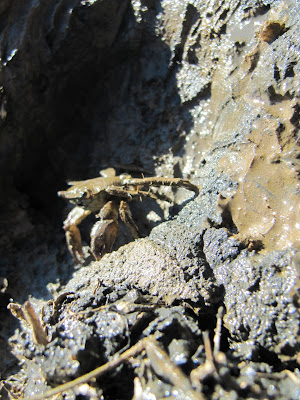 We disturbed many of these cuties in our work

We picked a shadowgenic cork oak for lunch. I could not resist and climbed in. I knew Rob would not be able to resist either. Nor could Emily. Wil could. Easily. A good breeze up in that tree! We needed that in the soaring heat. In (and below) the tree we also let the imagery of sex and violence sink in that had been burnt on our retinas. Walking around we hadcome across a pair of praying mantises. And everybody knows what these are famous for. But we saw it happen in fron of our eyes. A struggle, a wrestle, the male managing to have his way, yet after about a minute the lady starting to much up his arm by means of an appetizer, and then chewing up his whole head starting with an eye. Cruel, but fascinating. 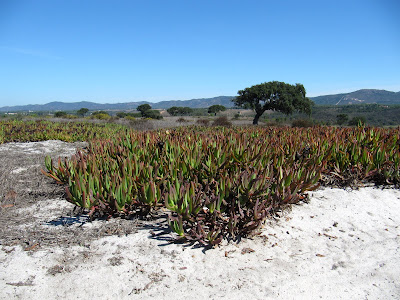 Our lunch tree in the mid distance 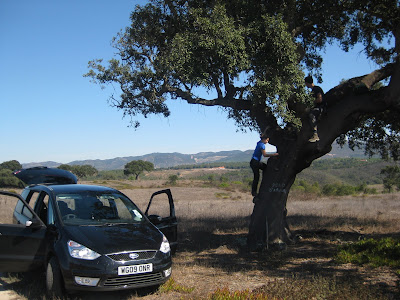 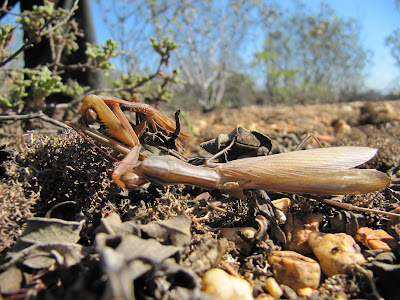 The praying mantises in their fatal struggle
Not too late we went to town. We needed food and internet. We found both. And then we went home. We processed the first preliminary samples, that would tell us to what height on the marsh the forams could be found. We found forams. Big smug bastards. Emily’s first forams! I think she’s hooked now. 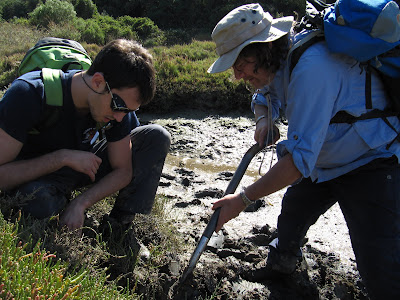 Rooting around in another marsh 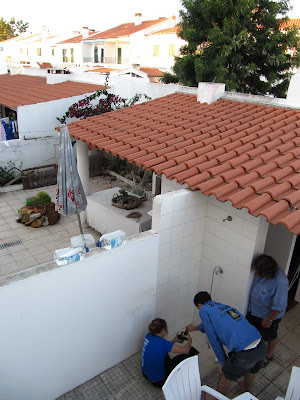 Our appartment came with an outside foram sieving shower!

The next day would be the big hard field day. Let’s get as much as possible done while Emily was still here! We carried two surveyors down, and coring equipment. And some other bits and bobs. The first thing Wil and I did was place the GPS over the benchmark the Portuguese had left. We wanted to measure that ourselves, to be certain. In 4 hours that would tell us its exact horizontal and vertical position. Rob and Emily set off coring and describing. That’s hard work! I dug some profile for a possible monolith, but we discarded that position. Too low on the marsh. And then it was lunchtime. 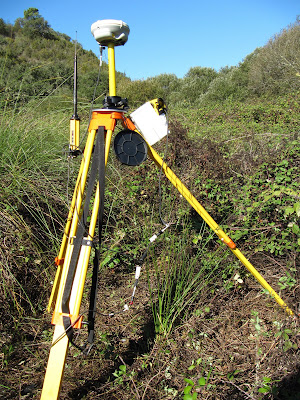 The GPS standing there like an alien space craft 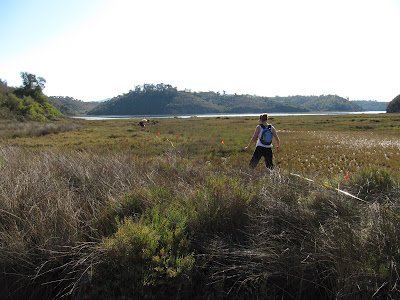 The transect we laid out 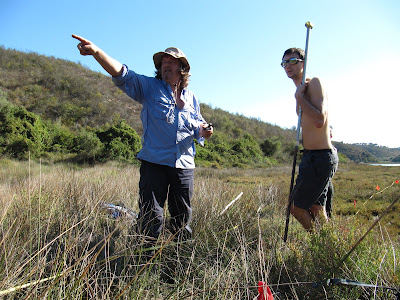 Wil and Rob in conclave 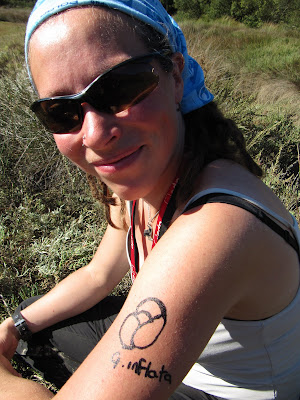 Rob had given me a beautiful tattoo! 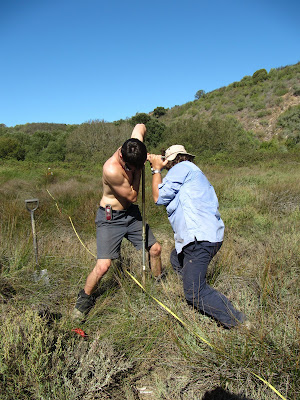 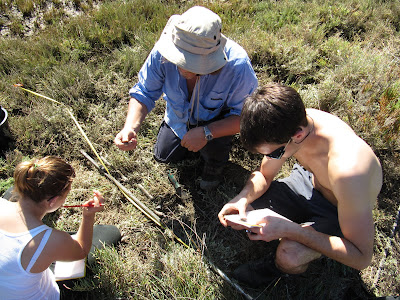 Describing a core
There are only so many people that can core at the same time. Four is not working. So after my pit Wil advised me to go find a good spot for having lunch. In the shadow, of course! It was ridiculously hot. Probably over 30 degrees. I was struggling. Rob, Wil and Emily like these things. But I found a place in the shade, changed into swimming gear and jumped into the river. Needed that! It involved some dodging of jellyfish (it is a tidal river) but it was good.
After lunch I coped with the lethal heat while we surveyed a transect. And when that was done we peeled Rob and Emily from the corer and went back to the car. We just had enough energy to do some “band pictures” and then we were of. Beerwards! And beachwards. I was mainly interested in the former but I was a minority. So within no time Rob was bouncing around in the sea and on the beach while I was enjoying a cold beer. Later Rob even explained cricket to me. It starts to make sense. 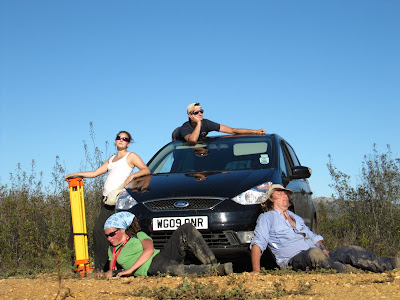 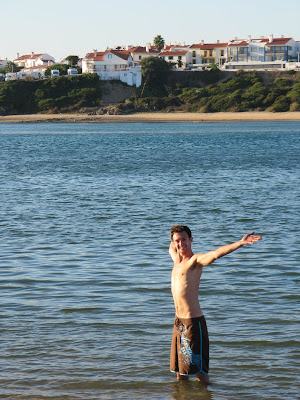 Tigger in the sea. He appears glad. 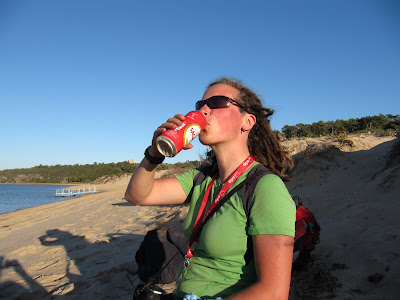 One home I immediately set out to make dinner. What was more impressive was that Emily, dressed in a bikini, a T-shirt and a pink towel, did not bother to have a shower or even change, but started to sieve samples and have a look at them. Before dinner was ready we knew where the samples became barren. 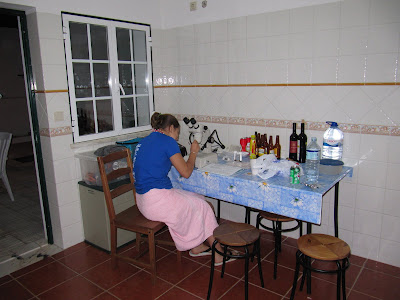 After dinner we evaluated our results, and made a plan for the day after. We would run into the marsh, take the surface samples, and run back again. And then drive Emily to the airport. And so we did! We sampled like a good old well-oiled war machine. And that’s more special than when we did that in Iceland: Wil and Roland had been there before, and done such things together several times. Here Wil was in a new marsh with people he knew for about a month, a week, and a day, respectively. But we pulled it off very well. 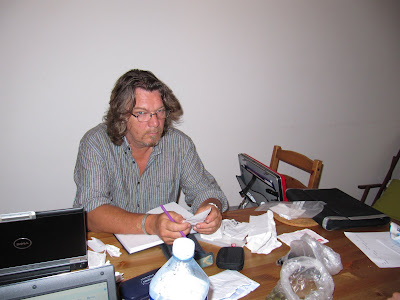 Wil engaged in his fafourite activity: accounting
I was very glad to retire into a airconditioned car afterwards and play the part of DJ while Wil drove. And drive all the way back, adequately cooled, while outside it was way over 30 degrees. It went well! From only having driven north of the arctic circle to through half southern Portugal, half of which on motorways, is quite a difference, and from time to time somewhat unnerving, but exactly the practice I need. That night we made pizzas, and went to bed early, after making a plan on to how to proceed the next day. We would get up earlier in order to escape the blistering heat! Or, at least, escape some of it.

And it worked! We got up in the dark, had breakfast, and parked the car while the sun peeped over the hills. We started in the blissful cool! And we worked well. We drilled the marsh into smithereens to find a good place for taking the monolith. Not easy! At many places disconcerting sand showed up. But we were not discouraged. And drilled and drilled while the sun rose in tune with the water. We had elevenses under the trees, drilled some more, surveyed our new transect and called it a day. Wisely so. The surveyor turns out to have a thermometer embedded. It indicated 30 degrees immediately after we had pulled it out of its insulated case that had been standing in the shadow. We were glad to go home. 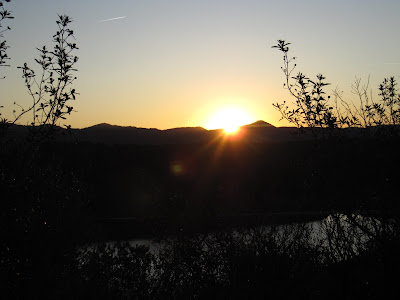 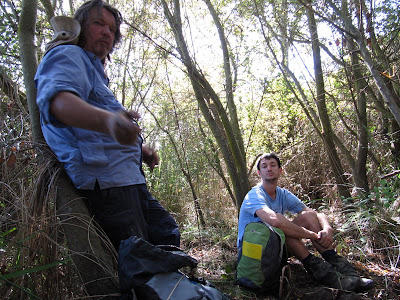 Elevenses break underneath the trees 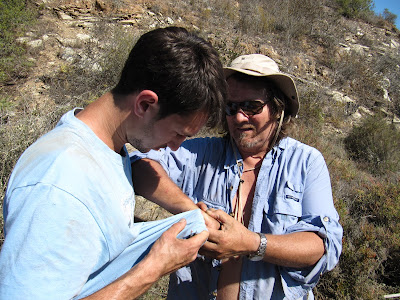 And then it was time to enjoy things like a tea, the beach (I skipped: not a beach type), the internet cafe (we found it, but it was closed! So this blogpost comes, again, from the tourist information) and then the supermarket. And then we´ll compile our results so far and make plans for tomorrow...
Posted by Margot at 15:11

Hi Margot. Just a quick note or I'm afraid I will forget to send this to you... Just watched this: http://vimeo.com/3395723?hd=1 again and it made me think of you.
Hope you'll like it and if so I hope it doesn't make you too sad or melancholic. Maybe it's best (not?) to watch it when winter's first chill reaches Plymouth. I don't know...

You seem to enjoy yourself in Portugal. Good! I'll catch up later.
Things to do, time to waste...