The day of arrival I only took a shower, drank a liter of tea and went to bed. That was a bit of an improvised activity, for these furnished rooms are not what they used to be. Of course there was an old, ugly desk with dito chair, and a broken cupboard, and a bed. But nothing concomitant with the bed. I had only brought a sleeping bag liner. Fortunately I had also brought my windstopper fleece, for the fieldwork, and I had had a Norway fleece as a gift. Combined with a normal jumper and the liner it was a sort of a sleeping bag. I was tired. I slept.

I only woke up once because all the jumpers had slipped off. And woke up refreshed a few hours later. The first thing I had to do was retrieve the bike! I decided to just walk there, and hope somebody would be at home. I figured I knew where my bike was, on the map, but not me. I managed to find out thanks to Janna, the Czech neighbour. I was off the tourist map... she lent me a better one.

The plan worked. The guy that opened the door was good with bikes, and put the pedals back for me, with his bare hands. A working bike! Now life can really begin! 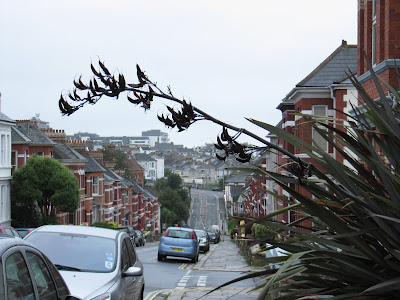 A typical view of Plymouth

I dropped off the clumsy bike box, and went shopping. The run down house did not seem to come with toilet paper. Not with a lock on the bathroom door, actually, but that was improved the very day. And I looked forward to some breakfast too. And I found a mall that was open on sunday.

After breakfast I wanted to update the blog. I don't want to start a new job with a burdening lag in blogging! So my first stop was the library. Closed. Then Tourist Information. They claimed there are no internet cafe's in Plymouth... at least none open on a sunday. So I could give that up. I biked a bit on the university campus in order to find my way the next day, and went home. I was tired.

I had a nap. And some tea with Joe Speedboot.

The lady at Tourist Information had, when I had to abandon the blog plan, informed me on cinemas. There was one that showed foreign movies! As she put it. Bring it on! I felt like one.

So after the tea I went. And found it without difficulty. Plymouth is a very unoverviewable town, where it will take a while before I can navigate it without effort. I was glad my friends had given me a map holder for on my steer! Made life much easier. Especially as it rained almost all day.

I watched "moon"; never heard of, but quite nice.

And on the way out I found a Mac in a corner. Free to use! So there all the blogging worked out, after all... One without access for my camera, though, but that I can solve later.

So far Plymouth has showed a mixed face. Grim, because of the very unwelcoming house. And the crappy weather. But I have a bike! And I do continue to meet nice people. And the environment breathes opportunities of the outdoorsy, cultural, historical and social kinds. I do however look forward to tomorrow: I'll meet colleagues! People I will meet again. And tomorrow I'll go and see a house I may live in the rest of the two years. Things will only be getting better. And it's not so bad to start with!

Ha, je gaat effe een paar weken weg, staat er opeens een enorme lap tekst! Or should I say: an enormous cloth of text (yay, engrish!)? Welcome to England... Things can only get better from that little room you've got. I googled Plymouth and got lots of pictures from pretty mountains, so I'm looking forward to the results of that new camera.