It was supposed to be easy. Of course it wasn't. I had a bike with me. I got in line in good time for check-in. But had forgotten that at Schiphol they are very specific about things. About bicycles, for example. I had to go down with all my stuff to the basement, to get a bike box. The friendly official managed to loosen the pedals, with all force that was in him, so I could take them off. Now, with a bike in a box, I really needed a trolley. I ran back to check-in. Where, by the time it was my turn, the flight had disappeared from the monitors. It was delayed though, and I could still get on. I did.

In Plymouth I put the steer of the bike back in position. And realized I could not re-inflate the tires. I had, after the tire failure in Amersfoort, have the mechanic change them all. He changed them into specimens with valves that do no fit my pump... I did not manage to get the pedals back on either, with my bare hands.

I made my way to the shutllebus to Temple Meads. Where I was informed they would only take my bike if contained in a box... ohno! But all the positive prejudice about Brits seemed to be true. I got the box back. With a smile. And when it fell off the trolley it was put back on by friendly passers-by.

At Temple Meads I was puzzled as to what to do. Where to discard the box? I remembered I had tape with me, given to me by Lien for bike packing purposes. So I decided to not discard it! I trampled it into more manageable size and taped a hand grip. Ready to go! Not sure where the Brits hide their timetables (I found out soon afterwards) I depended on spoken word for finding the right train. A lot of running up and down with a deflated, pedal-less bike did leave me on the right platform. With a Cornish pasty as dinner. And again, all sorts of nice helpful people, inquiring where I was headed and why, and offering to help me with all the luggage, jumped out from nowhere.

I got onto that train! And chatted up with an Exeter-based couple that had just had a viewing on a house in Bristol, and had decided to buy it. And a Plymouth rugby girl. I also found another bike with a fitting pump, so one problem solved! The rugby girl helped me out of the train. My new home was reached. Almost. 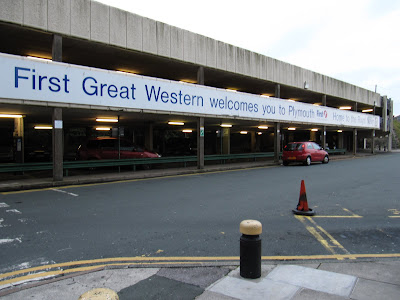 It says "welcome", in rather large letters, but it doesn't look especially welcoming, actually...

I phoned the guy that would let me a room, and he picked me up. He could, however, not transport the bike. He proposed leaving that in another house he owned. So we drove to the one that would be my home for a week.

It was dirty. And smelly. And worn. But I laid down my bag. And my head. The travel was over! My new life could begin. 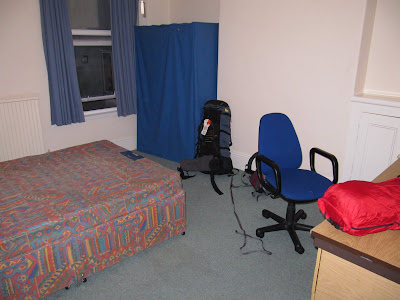