Rendez-vous with the low countries

I spent more than 30 years in the Netherlands. A lot can happen in such an amount of time. And it did. So where to start when one has less than a week to spend in this country?
No need to think for too long. I went to my mother. And we had tea and beer in the garden. And life was good again. 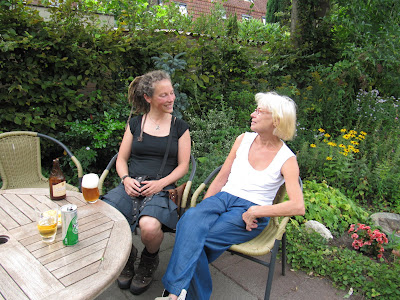 A rare picture: me and my mother!

Less than a week is not much, and may inspire haste and stress. But that failed to appear. I not only had tea and beer in the garden with my mother. I also had breakfast on the Varkensmarkt in Amersfoort (where my mother lives) with an old friend. A bit bewildered, yet pleased. 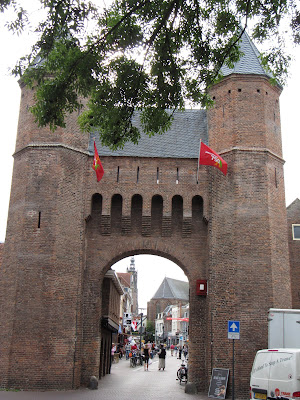 Amersfoort has all sorts of things Tromso doesn't, such as very old, brick buildings. Here the Kamperbinnenpoort.

My sister's household is not necessarily a stage for quiet and calm, as it is haunted by three turves of potentially noisy and bouncy ages. Yet the saltatory youth leaped without demanding my direct involvement. And in that way I could comtemplate life, the universe and everything with my relatives of voting age. And even enjoy my feared nephews. David, the oldest, is now so old he can float into realms I dare venture into as well. I even floated along, as a pround auntie, to his football training! My nephew David in full action

My niece, at the fragile age of 2, impressed with her calm and independence. I needed 33 years for less. Imagine the woman she'll be. 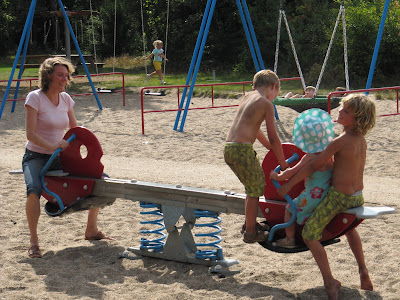 My sister and all her offspring on a see-saw
And not all was serene family life. I somehow managed to end up scheduling a ridiculously attractive guy in this short week. Twice! The gods protested, and arranged not only bike tire failure (inner and outer!) but as well a thorough disturbance of public transport, but we proved stronger. That was good. It left me wondering if the Netherlands are just a better country for such things, or whether I just don`t appreciate the male inhabitants of Norway. Either way I left recharged.

I also took the opportunity to meet Monique! Sixteen years of friendship now celebrated by walking the dogs in the woodlands around Bergen. No not Norwegian Bergen; the Dutch have one too. The younger of the dogs indeed was a sort of a pint-sized Elvin. And keen on licking out my ears. Cute! In sixteen years our lives had diverged massively, but somehow nothing had changed anyway. 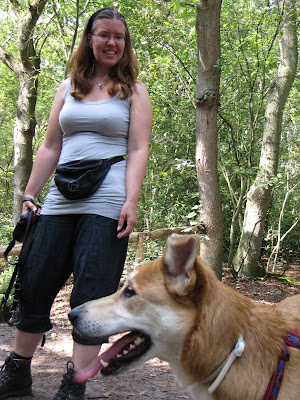 Monique and the oldest of the two dogs
University needed to be visited too, of course! For Donderdorst. Thursthirst. I biked towards the building, that as a greeting spat out Gerald. Good old Gerald! He looked noticably older than the last time I saw him... I hope that was not a significant sign. He was one of my inofficial supervisors, and he's an old, damn, here it all goes wrong with blogging in English, especially on some Mac encountered by surprise which I can hardly manage due to not being used to it. Which makes hopping from tab to tab a precarious challenge. Anyway. A mopperpot. To be translated later. But a dear one.

I was locking my bike outside the entrance when I was suddenly engulfed by a wild howl, and looking up through my hear made out two very fast moving shapes. Aafke and Emma! They were PhD students in Amsterdam when I was too. Emma had moved to Brussels, and I really hadn`t expected to see her there. But she was! And I knew Aafke would be there. We immediately ran off for cash and some kebab. Later so many other eagerly anticipated faces showed up! My very own paranymphs both were there, for instance. Trip down memory lane. 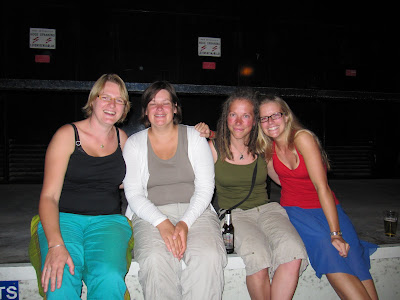 Emma, Aafke, me and Charlotte 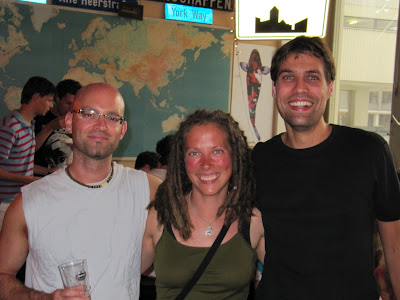 Alex and Martin, my old officemates, my paranymphs, and for the Norwegians: my mugmen!

After a trying schedule of men and alcohol it was time for a good lie-in at my mum's. With unhurried coffee on the couch. And a good old Dutch newspaper. But the last stop awaited: Amsterdam. 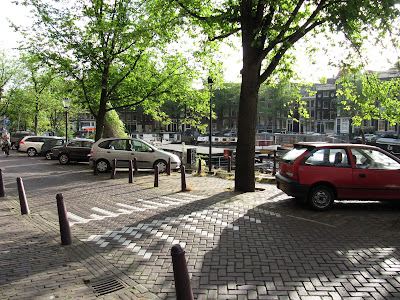 Amsterdam before the luggagge collapsed. And Knut: notice the Amsterdammertjes that demarcate the pavement!
I packed all my stuff, went to Amsterdam Central Station, and got ready to enjoy a nice bikeride through still home-like Amsterdam. Yet on the Oudeschans my bike bag collapsed. The Oudeschans! Where quite a lot of my romantic life has taken place. A place of enjoyment, loss and recovery. I recovered. My backpacks could hold all luggage. And thus I moved on. Past eetcafe Ibis, where I had my first date with Floor. So much memories in this town! And I reached Roelof. 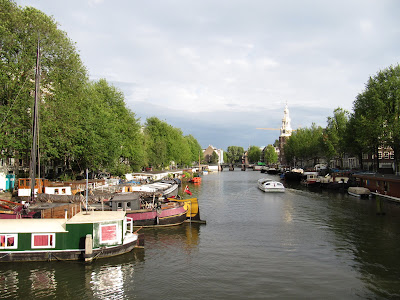 Another cliche picture of Amsterdam. But nice!

It was great to see him again. There's not many men like that. And soon after dinner more great men showed up. Verik as the avantgarde! Another strange new aspect of the blog: I'n now blogging both for people that have known him for donkey years, and people that have never heard of him. How to blog in such a way it is more or less suitable for all audiences? Anyway, lots of people I was really glad to see showed up. And the last (again Verik) left close to 5 in the morning. After a night of old times' sake, beer and aquevit. Time for bed. 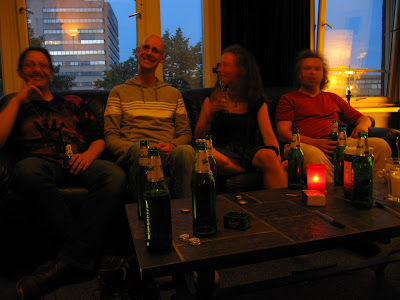 Jeroen (one of two), Verik, me and Jasper. And beer. 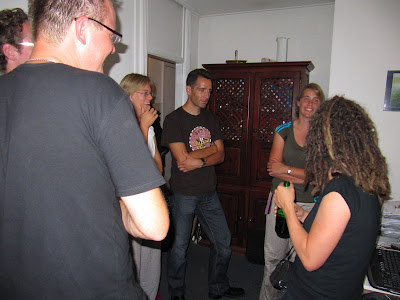 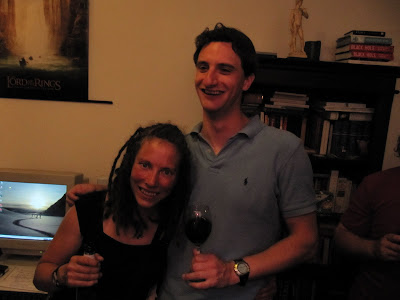 And me with nobody less than Roelof!

That saturday I hoped to buy a new attachment system for my bag, but that I could forget. Instead I let Roelof make me a good breakfast. Marijn, who hadn't been able to come to the party, came then. Good to see him as well! He even chaperoned me to the railway station.

And there I gave him a last hug in the train. The end of a short but very good visit to my motherland. A land that as a whole does not feel like home. But it has homelike parts. And people I have known for so long...
Posted by Margot at 15:25

You can stop contemplating: There is no way to blog in a way suitable for all audiences. And yes, I miss your Dutch too... (hinterdehinthinthint :)

Miewu! But you're probably right. However, I intend to continue this way. Even though I have not had a single comment from Norway yet...