I had an ambitious plan. Come here, find a place to stay within a week, and phone the movers to say they can start driving before I go to Iceland. I still have that ambition! But it's one of those ambitions, as most really, that take a lot of effort to realise.

On monday I had a look at a shared house. The description had sounded rather serene, but coming there there was no serenity to be observed. Small, cramped rooms, and an overpopulated kitchen clogged with dishes. I decided against. So I went back to my office, back to internet. Back to the accomodation websites.

I immediately arranged some viewings. It really works, such a website! Tired and hopeful I went home. Too late for the regular supermarket. But that's solved by the 24h mini-supermarket on the way home...

The best house was snatched away under my nose. It sounded so good! Unfortunately more people thought so.

The next two viewings turned out to be basements. And not a basement as I had in Norway; no, real dark basements. Not too tempting. Even though they were located in stylish old buildings with ornamental fireplaces and elaborate ceilings. So I still did not settle for one. And went back into the circus. Back to the office (the security guard already knows me), back to the web.

This time I made sure I was at the supermarket before 8. But still too late! Damn. It's open un sunday, why then not open on weekday evenings? Anyway, the 24h supermarket fares well with my erratic behaviour.

So today another viewing. A double one! Two floors in one house, both available. And if I don't take one of these I have another viewing in the late afternoon. And I requested two more. I'll suffer some unrest now, to win rest later. We'll see... time is ticking.

And this game is played real fast. The upper floor was quite good, yet furnished. And they have not yet contacted me to say if something can be done about that. And in the meantime I have made an appointment to see yet another appartment...

The other appartment was too small. No way I can squeeze all my stuff in. Not all my possessions are as liberating as valve adapters... It was nice though! Old and stylish, overlooking a church, and with the strangest feature in it: the window sills had latch doors... extra storage, one might think, but no: if you opened them you looked straight into the roof gutters. You would only want to store very specific objects there. Slimy, questionable objects. Strange! And what was strange too: the lady that showed me the place turned out to be half Dutch, half Norwegian... she did not speak Dutch, but we could do the 2nd half of the viewing på norsk! Who would have thought. 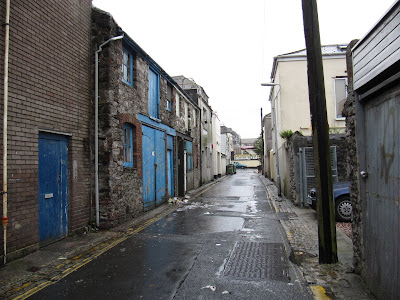 The dark blue door on the left was the not very welcoming entance to the too small house... I thought it was my style. But the house wasn't!

And then, another one! A beautiful classy appartment in an immaculate neighbourhood with a manicured lawn. I'm tempted. Bedroom large enough for keeping all my stuff out of the way, and a rather small living room, but that's OK if it does not need to contain too much. Kitchen with washing machine, so I don't have to worry about that. It's twice as expensive as the possibly furnished one, but still... it's nice to live in a nice place! Tomorrow may be decision time. Exciting!