The first guest was a Norwegian! Who would have thought. Bjørn, all tan a happy and just back from Svalbard, was the first to arrive, closely followed by Mats. The time to gather my composure was over: it was party time! We lit the grill, opened a beer, and welcomed the people that now started crowding in. 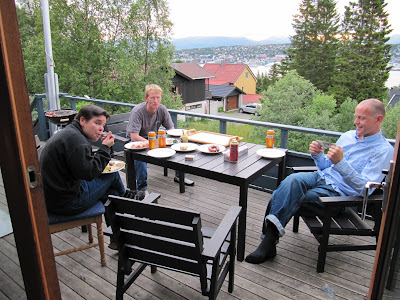 The quiet start of the party: Helgard, Carsten and Bjorn 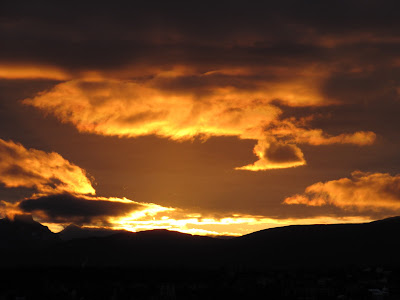 We were blessed with a beautiful sunset 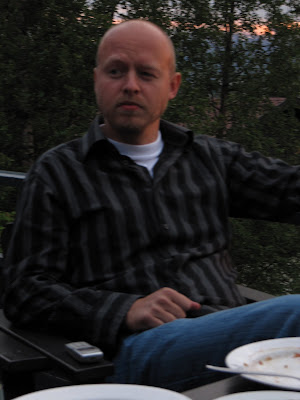 Steffen was wearing a stripy shirt for the occasion - what a man!
I did not really think too much about it being a very sad occasion. It was nice to see all these people! And the party went like a party does. More beverages of various degrees of detrimentality, a small minority of Norwegians (Bjørn, Fred Inge and Knut, basically) so no speeches, but some presents... even a Sinterklaas present! Dorthe still owed Carsten one. And delivered. I got all sorts of heartwarming goodbye gifts. And some body warming gifts, as well! A "Norway" jumper, and a Sami firemaking set. 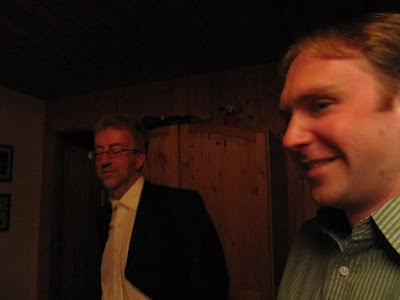 Stuart and Steve later that night, when it was the diehards who were left
Later things got a bit blurry, as they do. I think after these days of packing and moving I was especially susceptible to the incapacitating function of alcohol. I do know however that it ended leaning against Stuarts reassuring shoulder on the couch. And with Carsten threatening with carrying me to bed. That however was unnecessary. I entered oblivion on my own initiative. Another big step on the way out...
Posted by Margot at 11:33