I had been on fieldwork all week, I was tired. And busy. Because the next thing to happen was the Welcome Week, and immediately after that, the new academic year would start. So when I found out there was something going on in the village, with activities spread out over the entire weekend, I was a bit sad as I knew I couldn't really join. And I like joining local initiatives! But I did give myself permission to go for an evening lecture on the Friday. I had just enough time between coming home to have a meal and a shower, and then I was off to Neuadd Ogwen. So what has attracted me there? It was a lecture by a man I had heard lecture before, and I had found that fascinating. He is a local historian who knows pretty much anything worth knowing. Back then before lockdown he had spoken about estates and the Welsh slate industry. I'm not sure it was a very catchy title, but it absolutely was fascinating. And that was not all!

I had spent quite a while reading an amazing book about Welsh slate; its history and archaeology. And guess who had written that? Indeed! This very man: David Gwyn. And if that's not a recommendation then I don't know what is.

It even got better when I got in; I found my friend Dani by the bar. That was a nice coincidence! I ordered a beer and then we set down together.

Then it started. This time he would do his talking in Welsh. I was wondering about that a little bit; I had noticed that the book about slate I had read had been translated from English. And I doubted he would not be capable of writing a tome like that in Welsh himself! There must have been the reason why he had written it in English only. But it wasn't really my business.

What was my business was the content of the talk. He started with a bit of an overview of the history of the area, with the first Pennant became Lord Penrhyn, and then his descendants with their pinnacle of unpleasantness George Sholto Douglas Pennant. He had been lord Penrhyn at the time of the Great Strike. And he spoke of how Penrhyn Quarry developed. He also mentioned the aborted idea to dig a canal to the Menai Strait. And he spoke of the relevance of what was going on on the side of Bethesda which was on Penrhyn estate, and the side that wasn't. And he mentioned the road to Ogwen cottage, and called it Lon y Lord. That was when my ears pricked up. That is how I recognise one of the small country roads here, that I regularly use for running purposes. It is called that, not after God, but after lord Penrhyn; this was the route the slate took before the railway was built. It is an old packhorse road! And it goes from the village to the harbour, so that next total sense. But why did Lord Penrhyn need a road going in the other direction? That is not where you want to bring your slates!

David Gwyn did offer a partial reason: this road was older than the road that is now the A5. It seems that Lord Penrhyn had heard of the plans by Telford to construct a road all the way from London to the ferry port in Holyhead, in order to connect London to Dublin. And he thought he might already build some of it. Maybe it was a bit of a vanity project! Maybe he wanted to say that that the project was partly due to him. But Telford turned out to have different plans, and built the entire road on the other side of the valley.

At the end of the talk there was time for questions. And I was keen to learn more about Lon y Lord! And nobody else was raising a hand so I went for it. And I asked him why on Earth the owner of a slate quarry wants to build a road that leads to pretty much nothing. And the speaker explained that the road towards Ogwen cottage had not just been an attempt to lure Telford onto the Penrhyn-built road, but also part of the scheme to boost tourism in the area, and make money out of that. What is now Plas y Brenin had previously been a hotel, also part of the Penrhyn Empire. And that made my ears prick up again; I had already been pestering archaeologists before about the path between Tryfan and Capel Curig. I had figured it looked like an old tramline, but I never understood why anyone would put one there.

There were some more questions. And then it was over. Dani said her goodbye and left, but I was keen to stay behind for a bit. If he knew about the road going halfway between Bethesda and Plas y Brenin, maybe he knew about the route doing the second half! Had it been a railroad? And why? 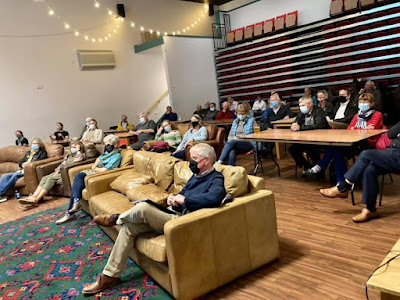 He said that as far as he knew, it had never been a railroad, but if I had any evidence to the contrary he was interested in seeing it. He gave me his business card. So I said I would contact him! And then I went home as well. And there I gathered my evidence.

There is this facility called Digimap; I have mentioned it before. It allows you to look at old maps. I had used it to figure out how old the salt marsh of the Cefni estuary was. But you can look at paths between Tryfan and Capel Curig as well! And in the 1880s, which was the oldest period for which Digimap offers evidence for this area, you could see an unmarked route following what is now a public footpath, going straight as a line, and splitting in two locations. Why would a road need to split? If two vehicles needs to pass each other, the only thing you need is a passing place over a few metres long. You don't need to split the road and make it run parallel to itself! But if you are running trains, then you do need that sort of infrastructure to allow trains to pass each other. And having a split on either side of the track (one near Tryfan and one near Capel Curig) makes sense. So I took some screen dumps and sent them to the email address on the business card.

I already had a response to next day. David Gwyn had emailed me a much older map; this one was from 1816. And on this map, the road was indicated as 'Old Turnpike Road'. So it really was a road early on! And even as a road, it was straight as a line. But on this map, the track did not split. That must have been a later addition. But why? Unless it had been a railroad. But why have one between Tryfan and Capel Curig, if there was no sign of a railroad between Bethesda and Tryfan? So I still had questions.

What I found interesting was as well that he mentioned the only railroad in the Ogwen Valley he knew of had been an incline railway associated with the leat on the northside of the valley. I had noticed that leat quite early on (picture in this post), and been puzzled by it. Why was there a leat there? I think it had been his own talk, just before lockdown, which had finally made me understand the leat much closer to my home. That was meant to power Bryn Hafod y Wern. That leat, by the way, is not active anymore, but the one in the Ogwen Valley is.

A few emails in and I was already a lot wiser than I had been at the start! But I was clearly still on the mission to find out why the path to Capel Curig had these splits. Who knows, maybe one day I will find out!