Wear and tear in the dig

The whole reason one wears knee pads is that one crawls around in abrasive environments. Knee pads therefore don't last forever! Unfortunately.

Two and a half years ago I had made a pair of knee pads that would suit my needs. It was a lot of work! And they have served me well. They needed a lot of maintenance; the things stay on because of the rough end of velcro attaching itself to the material of the knee braces that form the base. But that's not a very strong attachment, and it gets worse when the material gets dirty. I have had to add a lot of velcro, both the rough and soft parts, to keep them in place. That did the job.

From summer on, work in the dig had been regular, and since October even intense. And I tend to be on crawling-around duty! I really need the knee pads in there, and after some weeks coming out with blue elbows I also invested in elbow pads again. I found a discounted pair of skater's pads online and bought them; they do snag in tight places, but they stay on and they provide a lot of protection. A good investment! But in the meantime my knee pads suffered. During a particularly heavy session the plastic pad on one of them had broken, and I had stitched that together again. But it sort of showed they were on their way out. After a nine hour session in Dig 2 that involved indeed a lot of crawling I saw both had pretty much given up. The plastic outer bit is too brittle to last forever! But I'll need the protection so I have to snap into action. I tend to already come out with bruises all over if I wear knee and elbow pads; I don't want to know what state I'd be in if I went without. 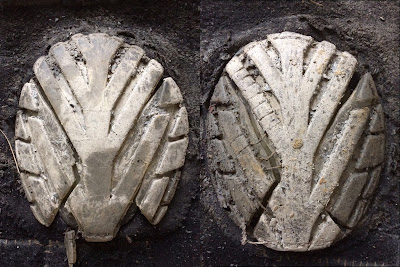 The hard bits of my old knee pads; they've both broken into bits. Notice the old repair on the right one...

I had already bought material to make a new pair; this time I chose leather as an outer layer. That's a bit more flexible. Now that I'm briefly unemployed I have time to make the new pair, and soon they'll be put to use. I hope they'll perform well! There is more crawling to do in our digs...