A new day, a new phase. I am a lecturer now! It sounds very responsible. Of course I've already lectured more in my latest postdoc job than I will in this entire post, but hey ho. This time it's official!

On my first day I started lecturing at 9AM. It meant, of course, I had had to prepare in my own time. That does mean the university had been stingy, but I can't say I am surprised, nor do I have a strong precedent in saying no to unpaid work. I hadn't prepared as well as I like to do; there is a limit as to how much unpaid work is a good idea. 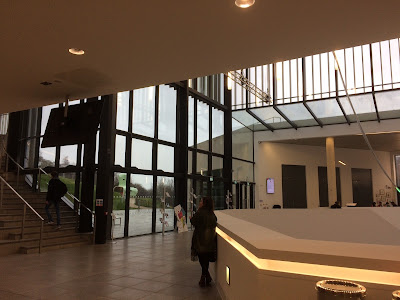 When I was back in the office after the lecture I decided to sort out my science communication module; I had to figure out what to do with my students and when, book rooms for these occasions, and email them what I'd come up with.

Then I communicated with teaching administration about getting first year's tutees; I will be assigned some, but until that has happened I won't see the allotted time slots so can't start planning much. They've not appeared yet!

Then I had a look at the Climate and Climate Change module that is about to kick off. I am module leader, so should have a solid grip on what goes on, but things had already got complicated before I started. I had been asked to do a day in the field with the first year students, but that had been booked over the top of three lectures in the climate change module. The timetabling unit had probably not noticed the clash because at the time, I wasn't assigned to that module yet. But that meant I had to now move these lectures further back. In itself not a problem, but as the module leader I am suppose to introduce the module. Now I would be the fourth or so person on the scene! That defies the purpose of an introduction. I had to try and move one of my lectures as far forward as I could!

I also noticed the deadlines were all over the place. Different dates on different websites, and some on Saturdays; that's no good. I also had to have a look at the lectures I'll be giving, and update them if needs be. This is the most political module I've ever taught in, and politics changes quickly. A lot of updating needs doing!

In between doing that, I phoned a clleague about the day in the field coming up. I had no idea what to expect; I had not been before. Unfortunately, it had always been organised by James, and now nobody knew who would do what, where the materials were, who would prepare the site, etc etc. That required a lot of running around trying to get our heads around this!

Altogether it was a day of running from one topic to the next. Luckily I had a break in the middle; I went to briefly walk my favourite dog. That was nice for the both of us! And this was only the first day! The coming weeks it will stay like this. I think by April things will be slightly less hectic!
Posted by Margot at 09:43