When I ditched my orthopaedic soles I lost a shoesize or two. I had to go and buy a new batch of shoes! I had a pair of approach shoes I had done the inital trials in, and these do well for day-to-day use, but I also need footwear for other purposes. For underground use I have a pair of boots I had initially used with my modest insoles, and which I now wear without insoles but with two pairs of socks. For hiking I bought a second-hand pair of light boots for a few tens of quid. But I also want to have more solid boots for harder work, such as with crampons. 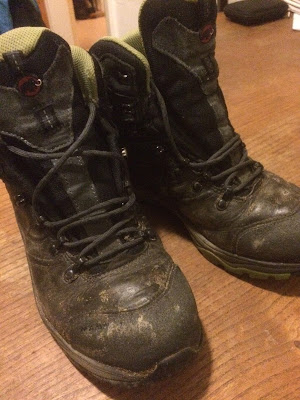 I kept an eye on boots on a Facebook group dedicated to buying and selling second hand outdoor stuff. Some boots came up, but these heavy boots are costly, and I don't want to spend a lot of money on boots that don't fit. Then a pair came up in nearby Llandudno. I arranged with the seller to come and try them on.

When the day came I struggled a bit to get there; it was very windy and some people did not adapt their behaviour to that, which lead to closed roads. But I got there! I met the lady who was selling them due to them being too small. I tried them on, scampered with panache through her front garden, and decided they did fit me. I bought them! 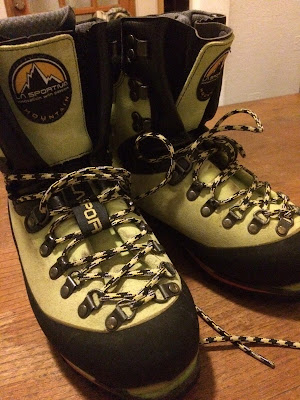 They are a bit clunky; the light boots above are only 500g per boot, and these are 800g. But with clunkiness comes weight. And they still are lighter than the wellies I wear underground; these are over a kilo each...

I don't have time to scamper through the mountains with crampons these days, but well, as soon as I do I now can! But by then there may not be any ice left in the mountain. However; these boots should last me many years...