When I was between jobs, I was asked by my colleague Martin if I could perhaps help out on his day in the field in February. By then my new job would have started! And I said that was fine with me as long as I was not otherwise engaged. So he phoned up the timetabling people, asked them if I would be available, heard I would, and booked me in. However, with me not being employed yet, the timetablers didn't know half of my commitments, so I later found out I had this day in the field planned on the fifth day of my new job, and planned straight over three lectures. Oh dear!

So what was the trip? The field site was a cliff caused by coastal erosion, which showed a very interesting local story. It showed glacial sediments originating from Snowdonia, and then ice from the northeast ploughing ruthlessly over the top. In between were lovely proglacial sediments. And the students are only in their first year and they don't need to recognise the details, but they are asked to make a sediment description of nine windows of sediment we had demarcated. Then at the end, Lynda would tie it all together. We would do this twice; some colleagues were doing levelling at a nearby site. After lunch we would swap students.

I thought I probably should be involved in this; it's not quite up my scientitfic street, but it's geology, and that is what it all started with, even though I turned a bit climatological later on. So I moved the double-booked lectures back, and resigned myself to being rather busy. I would lose a whole day to the field! And I need many days for lecture preparation. But that's life. Then the issue of getting the trip sorted started (another pile of confusion resulting from James' departure) appeared too. On Monday the day before the actual trip, I had a recce in the field with trip organiser Lynda. We went looking for the nine windows. Some were not there anymore; the cliff still actively erodes. We found good locations for replacement windows. We were done fast, and that's good, as it was raining. I hoped it wouldn't do that on the day itself! 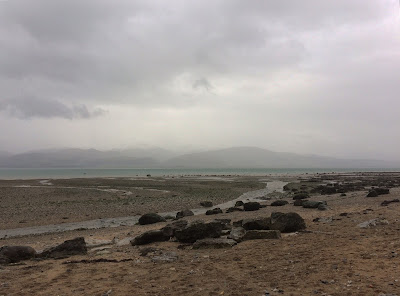 The situation on the beach on the recce day

When the day came Lynda loaded up the kit we needed for our bit of the trip, and drove off. I placed big A4 sized labels at the sites. Soon the students appeared! Lynda took them to window A and explained to them what was expected of them. They were supposed to know; they had practiced this in the field, but some recap was needed. Then they divided into groups and set off. 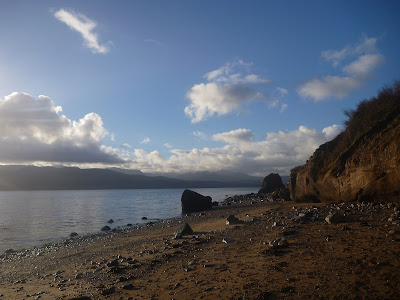 The way we found the beach on the actual day: a lot better! 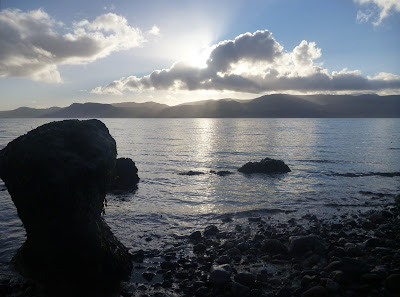 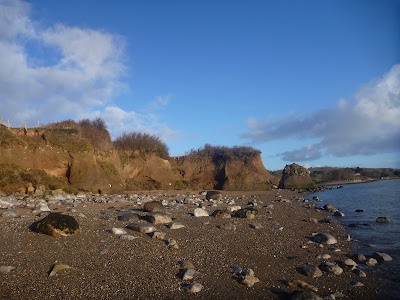 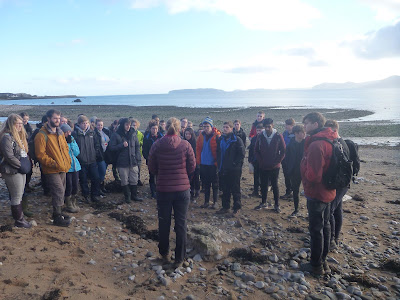 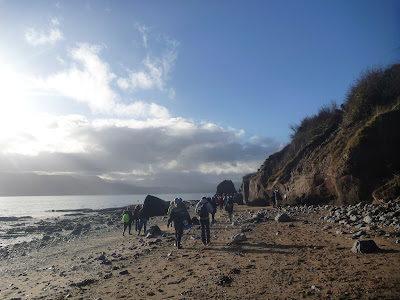 Off they go, describing sediments! 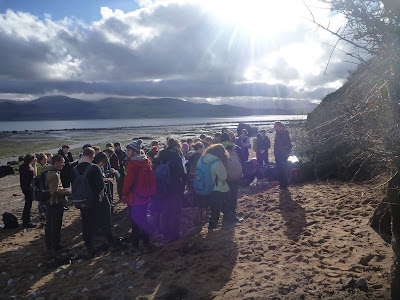 Quite unlike the day before, it was a glorious day. Sunshine! The students were in good spirits. They also set to work with panache. They barely had any questions, and they just tended to see what we hoped they'd see. It went well!

Lynda and I wandered around, just keeping an eye on things. A light job! By noon we got them all together for the debrief. They were a bit reluctant to speak up about what they'd seen (students will be students) but we got it out of them. They got the point about the two ice masses and the water-borne sediments in between! Very good. And time for lunch.

I went to a tea shop with Lynda and quickly had a toasted sandwich. Then we went back! The second batch of students had less sunshine and more cold then the previous group; they were also a bit less fresh after alreayd having doen a half day. They still did well, though! Altogether it was actually quite pleasant to spend a day at the beach. I even had time to sit on a rock and contemplate my upcoming lectures! Altgether a succes...
Posted by Margot at 10:48