Temporal end to a string of breakthroughs

My Sheffield job was done, and my PGCertHE was as good as done, so when Miles suggested doing another full Thursday in the dig I jumped to the occasion. It weas a beautiful, sunny day, but one can't let an opportunity to dig slip. Our very ambitious aim was to get Miles through the collapse I had only scaled the previous time. As it was, it was quite tight for me; there was work to be done! And Miles also wanted to extend electricity all the way to that crawl, so that would be him doing other things for hours.

We got down and I went to fetch the cable Miles would use. It was in the other dig, but we had no acute plans to use electricity in there so I went down to retrieve it. It is rather unwieldy thick heavy stuff which I have been lugging all over the place several times before, and un-knitting it from the crawl it went through was a bit of a chore; so much so Miles came to see what the hell I was doing. But we got it!

Then we went in. I would start on the Crux while Miles would bring electricity through; we had a cable there already, bit it was so thin the voltage dropped massively along the way; hence his plan to replace it with the white cable. I took the drill and started drilling holes in the rocks that made the Crux the Crux. I attacked four rocks; I figured that was a good start. When these were out of the way it would be clear if anything more would be needed. 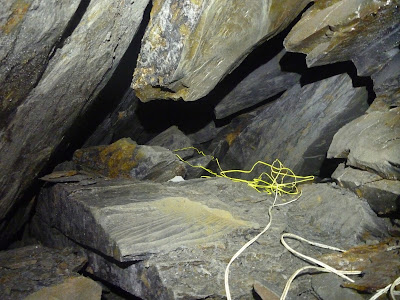 Last picture of the Crux

We blasted them. Success! Suddenly the Crux was Crux Chamber. I lugged some of the rocks out and it was a passage. I thought it would be an idea to see if  that meant it was now Miles-proof. He lugged a few more rocks out (he's that kind of man) and then indeed went all the way into the new chamber. Success!

With the halfway mark now cleared it was time to have a look at the far end! I had hoped to be able to improve that with a crowbar, especially from the spacier outside, but that wasn't going to happen. When I was out anyway, though, I went through and stuck my head in the next collapse. You could just crawl in for meters! Not all the way, but there was a little gap you could look through. We should be able to open that up without too much faff! And I also now noticed some graffiti. Nice! 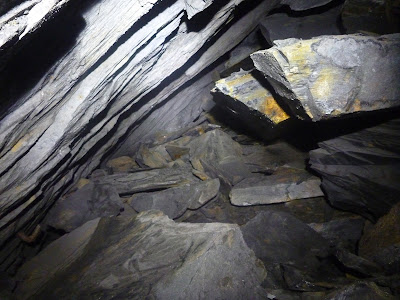 The open passage in chamber Y 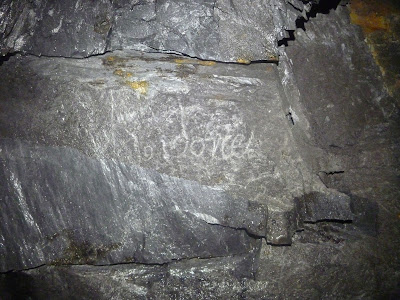 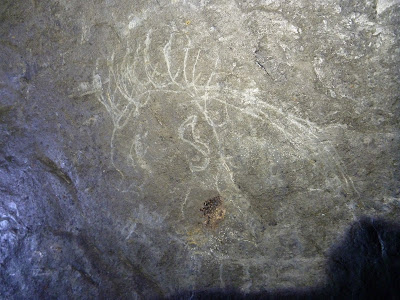 
I went back and retrieved the drill for drilling two holes in a rock that made things rather complicated. When that was blasted things looked a lot better! I could now pass comfortably through.Very nice! 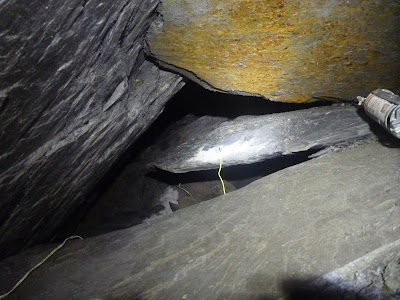 One can see why this rock displeased me

Even though now the route was fine for me, I figured the life expectancy of a rock you had to slither over was short. Miles would not put up with something like that! So I suggested we blast that too. We still had battery power. While we were waiting for the resin to set I did something rare; I had to go for a leak. During earlier resin-drying breaks we had been drinking so much tea (I had come in with three flasks and a water bottle) I now had to retreat. A bit of a faff if you're a woman in a one-piece furry suit and an one-piece caving suit. But a girl's gotta do what a girl's gotta do!

Blasting the rock did improve things a lot. I went in to clear the rubble out while Miles further attacked the front of the crawl. My tidying went alright, although to my disappointment there were still two sticky-outy bits in the way. One was the rock I'd blasted; it had not crumbled as far back as I'd hoped, and when I tried to lower the floor in order to provide more accommodation space that way I could remove quite a lot but not one big rock, that now stuck out upwards. Oh dear! But it was easily big enough for me and I had hope for Miles. Would he give it a try? He did!

It was a bit of a squeeze to get past the sticky-outy rocks but he got there! Success! I was very happy. Now he could see the level for himself! He wasn't enjoying the deep cold water though. I had made sure to wear neoprene socks so I was alright. When we got to the next chamber it was clear he was on a roll now. He went in! And he had a detachable lamp, so he could shine it into the narrow gap at the end, and he said it looked promising. He also looked up and saw a void. Maybe a project for the next time? 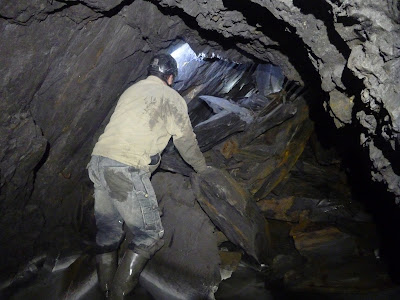 Miles inspecting the next collapsed chamber

When we came back he also spotted a void in the previous chamber. He suggested I climb up but I wasn't so keen on climbing onto all that hanging death. And by then it was 8PM; such things are done best when fresh! We went back.

We did, saw the results, and packed up. By 10PM I was back at my car. No idea when we'll be back! Miles said he would be too busy to come back for at least one week, but maybe more. We'll see! I can't do much in there without a drill and explosives, and Miles had taken all of that out. But the next week my new job would start and I might be very busy myself. I was glad we had ended on such a high note! And maybe the next step will be going back to the other dig. No reason to not work from both ends!
Posted by Margot at 11:44