It was February the 14th, and I had been getting a bit apprehensive. I was really hoping I'd get mail! And it came.

There was the EU referendum. Then there was the American election. There was mayhem all around and my voice didn't count. The next elections that have the eyes of the world on them are the French elections with Marine le Pen hoping to get the top job, and the Dutch elections in which Geert Wilders hopes the same. I don't have a say in France, but finally, my voice counts in the Dutch elections! I had registered to vote by post. You can then choose between getting your ballot paper by snailmail or email. You have to send it back by snailmail either way. I asked for the ballot paper by email; I had registered while on my old job, and I wasn't sure if I would perhaps have moved by the time the elections came.

I seemed to remember that voters abroad would start receiving their ballot papers by February the 7th. I kept going to my mailbox; anything yet? Would something have gone wrong? Nothing on the 7th. Or 8th. Or 9th. I got apprehensive. Then the 14th approached and it got nerve-racking. But then it arrived! Romantically in the evening. 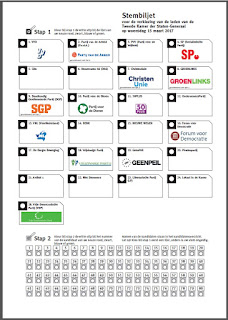 Normally, in a Dutch national election, you get a ballot paper the size of a newspaper (in 10 pt Times New Roman, or something) because, with proportional representation, there are hundreds of people you could vote for. This time I got something else; an A4 sheet for the actual voting; it requires pointing out separately what party you want to vote for, and which person on the list of that party you prefer. I was referred to a governmental website for a specification who actually made up each party's ballot list. That information was contained in a 26 page PDF. Dutch voting for you!

I will make sure my vote heads for the Hague in good time. I have a voice, and I want to use it! I really really hope this time I won't wake up to bad news the day after the elections this time...
Posted by Margot at 12:16