Another day in the hills

I was hoping I'd have time to have a mooch around in the hills in my time between jobs. And to a certain extent it's happening! I had gone the previous weekend, and the weather forecast inspired me to go again this week. I had a big mountain on my list; Moel Hebog. A bit further west than all the famous mountains such as Snowdon and Cnicht and the Carneddau and the Moelwyns. Having a bit of a preview on Google Maps drew my attention to a slate quarry to its south: Gorseddau Quarry. Interesting! I checked whether one of my underground mates, who had once offered to show me some interesting things on Hebog, was available to join me, but unfortunately he wasn't.

The weather was supposed to be good in the morning and most of the afternoon. However, when I got up and got ready, I also re-checked the weather forecast, and it had changed its mind to heavy rain until 11-12 AM and then sun. I postponed my trip a bit! And decided that with a shorter day I needed a shorter trip; I would just head to the slate quarry and probably forget about the mountain.

I got to Beddgelert by 11AM and it was still raining quite a lot. I read a bit of newspaper in the car until the worst seemed over. Then I set off. I walked through the village to a footbridge over the (steam) railway, crossed it, and immediately I was in a beautiful landscape. Isn't Wales lovely! 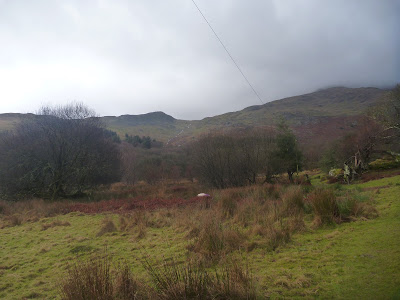 This picture is taken only meters outside Beddgelert 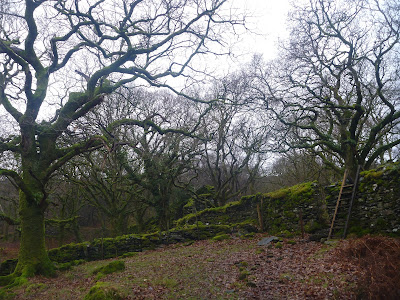 I walked up the path that sometimes was clear and sometimes most certainly wasn't. At some point it seemed to go the wrong way, so I went bushwhacking. It also started raining again. I was getting hungry, but it's not very nice having your lunch in the rain, so I walked on. The absence of path slowly rounded a hill; I expected to see the quarry a bit earlier than it actually did. It was a bit miserable in that weather and on a grassy slope without a path! At least it stopped raining again. And then I hit an almost proper path. 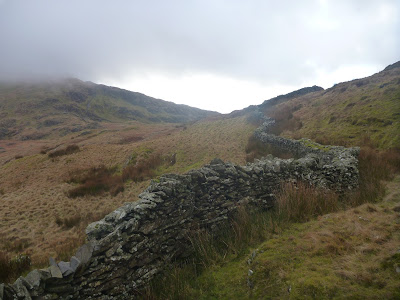 After not too long the path lead over a crest. The wind hit me only seconds before the view of the quarry did too. Cool! I decided to go back to the lee side of the hill and have lunch. Then I'd explore the quarry! And so I did.

The first view of the quarry

The quarry was very pretty in the afternoon sun. It was also rather pristine; there was a public footpath coming past, but clearly not a very well-used one. I had seen no other human since crossing the railway bridge and I wouldn't on the way back. So this quarry was just left to its own devices; no new paths, no fences, no signs; just a quarry. 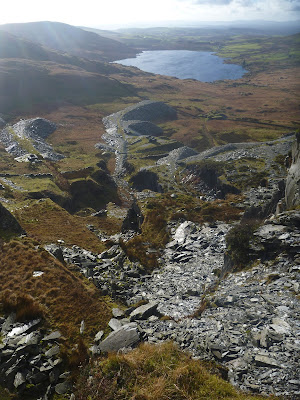 The quarry seen from above 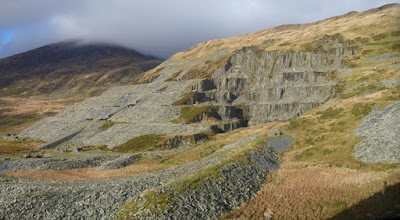 The quarry seen from the other side

I had a bit of a mooch around. Then I set off on my way back. I took the same route; with the sun out, the route would look quite different. And it did! I enjoyed amazing views of the snow-dusted peaks of the Snowdon Horseshoe, Cnicht, Moel Siabod and Moelwyn Mawr. Lovely!

The snow-dusted peaks of Snowdonia in the distance 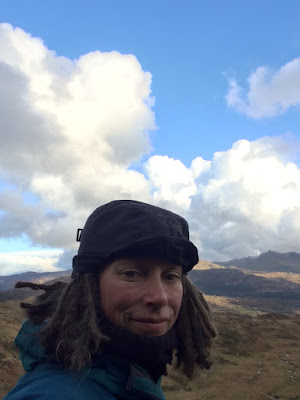 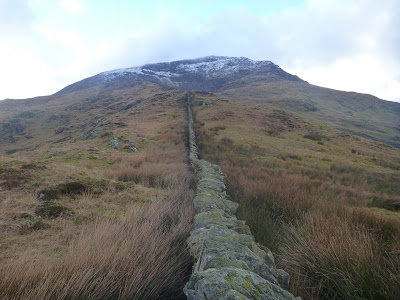 Moel Hebog, which I hope I'll visit some other day

I got back at the car when the afternoon sun was turning orange. Maybe my timing had been imperfect! But that's how things go. I had had a nice walk! But now I was keen to get these soggy socks and shoes off...
Posted by Margot at 09:10