I had a very good idea for the Saturday. Get up, put my running kit on, drive to the supermarket, do my shopping, drive to a village further west, go for a run, and go home. It wasn't to be!

When I got to the supermarket parking lot people started gesturing at me. I had a puncture! I had noticed the ride had been a bit bumpy, but we have a temporary road surface there, and I had blamed that. And the parking lot of a supermarket on Saturday is not a fortunate place to change a wheel, but hey ho, it had to happen. I'd damage the wheel if I would first drive home. I first got the shopping out of the way and then reached for the manual. I had not changed a wheel on this car before, and I had forgot where this car kept its wrench for undoing the bolts. It is well-hidden, I can tell you!

Next was getting the spare wheel out. It's hanging, just like with the Fiesta, underneath the boot. In this car, undoing the hook is easy. But then the difficulty came! The car is so low slung the gap between car (especially tow bar) and ground is smaller than the spare wheel is high. Oh dear. It took a lot of aggression to get the bloody thing out! Who designs these features?

Next challenge was getting the wheel cap off. That took two people; a man had pulled up behind me, and offered help. I pried the edge off, and he then stuck the wrench in between, and levered the thing off. Nice of him! But who designs these things? Next was getting the rusty bolts out. I had enough aggression in me to do that. Seeing the bolts move reassured the man who had helped me and he went off.

Next I jacked the car up, and tried to get the wheel off. Oh dear. It wasn't going to budge! It looked solidly rusted into place. I kicked it. I banged it with the wrench. It still didn't budge. And I was a bit afraid the whole car would fall off the jack if I gave it more wellie.

A supermarket employee had already popped by to ask if I needed more help. I saw him again, and flagged him down. Could he get the damn thing off? He shoved and kicked it a bit too, but to no avail. He said he had been in the same situation once, and had had to call the AA. He recommended I do the same.

I decided to phone Guy instead. He knows about cars, and he lives a stone's throw away! But his phone was off. Oh well. AA then. Of course David knows about cars too, but he lives further away, and I didn't want to bother him. The AA sent a person. I had to wait now. I was glad I had bought a newspaper! 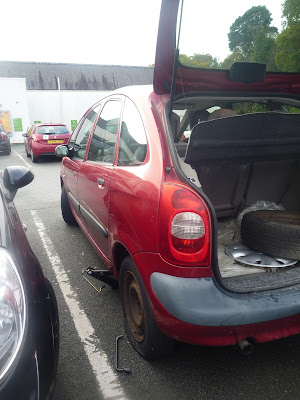 When the car next to me left I thought I should keep the space clear. If the AA would be elaborately whacking my wheel they would need space. I dumped the spare wheel next to my car. Taking two spaces in such a busy car park is a bit embarrassing but it had to be done!

Next thing a car wanted to drive over this spot to reach the opposite spot. That's fine; however, they drove straight into the tyre. Oh dear. The driver came out, and apologised. He said his wife had not warned him. His wife then opened the window and informed me she most certainly had, and that he wouldn't listen. Oh dear! I tried to stay polite and strictly neutral. After a while the man vanished into the supermarket. I asked the lady if he was going to buy the divorce groceries. She answered she'd wish, were it not for the financial consequences of such process. I said I understood; before you would know it she would be driving a car like mine, rather than the one she was in. She agreed. Oh dear again.

Then the AA man arrived. And, at the same time, my office mate Paul. He had seen the empty-ish spot and wanted to park there. I advised him against! He conceded that buggering off would be his best bet. He left and the AA van pulled up. Paul later did come back to see what was going on, but the situation evidently was under control.

The AA man was a nice chap! He inspected the scene and concluded I had already done most of the work. Then he got out a very big jack. He wasn't keen on cars falling of the jack either, and preferred his superior equipment. That would allow him to apply the correct amount of violence! But the jack, instead of lifting the car, was crumpling up the chassis. Another oh dear. He described the state of my car in unequivocal terms. Then he found a more solid spot further back where the jack actually did jack up the vehicle. That allowed him to wallop the wheel from the back with a mallet. Soon it came off! Then he took a steel brush to the heavily corroded stump, before putting the spare wheel on. He wasn't done yet; the spare tyre was only half-inflated so he had to do something about that too. Then he was done! However, I wasn't; I now had to postpone my run until having popped by the local tyre place for a replacement. They were busy; they accepted my punctured specimen but told me to come back in an hour or so. I had to plunge back into Saturday traffic on Caernarfon road; not pleasant.

My run went swimmingly. It was pretty and good running terrain! I was getting a bit hungry, though; I had intended to run at about 11AM but it was past 1PM by the time I set off. 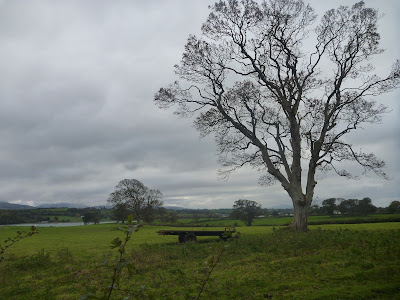 Rural idyll along the run

After my nice Brynsiencyn run I plunged back into the crowds of Caernarfon Road. I got me a brand new tyre and was finally ready to go home. The people offered to change the wheel so I would be driving on the new one, but I preferred to do that myself, at some later time. It was a quarter to three by the time I got home! There goes the morning. And most of the afternoon. Oh well! I've learned about my car. And I have a brand new tyre!
Posted by Margot at 10:09