An email seemed to come out of nowhere: it mentioned rescue training the day before the upcoming big project meeting in Sheffield. That didn't sound ideal! But I had missed two training events in the short time I had been a team member, and it was time I showed my good intentions again. And it's just a good thing to do. That the day before I'd meet up with the PCG only complicated things, but you're not a good scientist if you can't work to deadlines. I had to just make sure I was ready! And by the Friday evening I had managed that.

We would do an exercise in Parc. I like Parc! We met in the car park, and there were informed of the scenario. A man had gone in the previous day, and not been seen since. He did not have SRT kit with him. We would have to find him and get him out! The controllers stuck their heads together and made a plan.

When they seemed to have worked out a strategy, a man called Bob asked for two volunteers for a long walk. A woman called Heather raised her hand, and so did I. We were tasked with checking the main passage; it's quite long. I like being on speed duty! Run down the endless passage, check out every rathole along the way; my kind of thing! And it was good I knew the way, as neither Bob nor Heather had ever been in Parc. And there were more like that; one chap was tasked with keeping tabs on who and what kit was where, but he had positioned himselof at a capped shaft you can't possibly get in. I showed them the actual entrance, and off we went. We looked into every hole in the floor we came across (there are many!) and shouted down every one of them. No answer! We moved fairly fast. No sign of a casualty.

Bob told me we had been instructed only to go up to the crawl. That was probably good; the casualty might be beyond, but by now maybe he had been found by the others, so it was good to touch base. We might be needed for stretcher carrying! And if the others didn't have him yet either we could just go back and continue where we had left off.

We went back. The casualty had been found! So we were put to work carrying kit in; we needed a stretcher, and enough ropes and metally bits to rig first a short shaft and then a tyrolean as the stretcher had to go over a weak spot in the false floor. We also had a field telephone and a heyphone in use. All together that's a lot of stuff!

Next thing up I helped getting the stretcher down that first pitch. By then the tyrolean was pretty much rigged. We got our casualty, Mark, across. Then it was just a matter of carrying him out! Not necessarily comfortable; there are several obstacles in the way, and a lot of thew way the floor is covered in water so you can't put the stretcher down to take a rest. But we did well! We even managed to get Mark over the fence at the entrance without him noticing. In no time he was out and free! I think the planners hadn't figured we'd manage so quick. 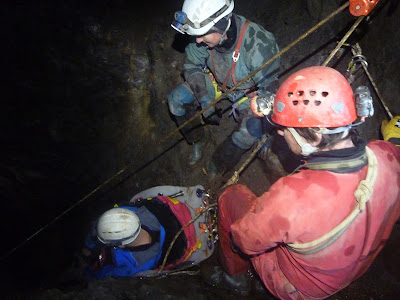 Lowering the stretcher down a short pitch 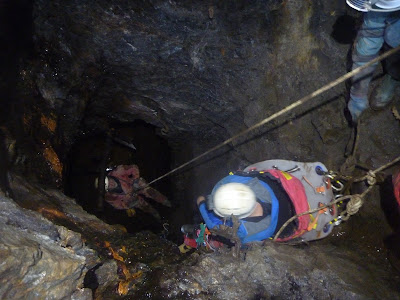 At the entrance, we had a small evaluation, and then people went in again, to de-rig all the ropes, have a look at the heyphone which had caused so me trouble, and take all the kit out again. Then we were done! David even considered popping into our dig afterwards, but we decided against. Probably for the best!
Posted by Margot at 09:03