This tale starts in the Celtic Sea. With RV James Cook we are trying to core the unforgiving sediments of this shelf sea. We use a vibrocorer which vibrates its way into the sediments; once it won't go any further the barrel is pulled up. A core catcher (a metal ring with uwards-pointing flanges) makes sure the sediment doesn't then fall out. Or rather; that is the idea.

An inside-out core catcher is no use, so we were invited to take some home as souvenirs. And I did! I figured they'd make fine candlesticks. And they do! So now I can enjoy the snugness of the Welsh autumn, lit by candles in reminders of my time at sea. Lovely! 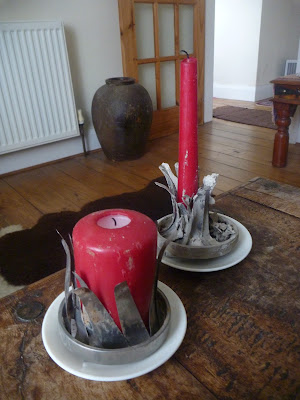