Another spell of Sunday digging

Another weekend, another spell of digging! I teamed up with Phil again; David tends to stay later than I want to. We met up at the lakeside cafe. I was keen to go up to the parking lot and get started; if you want to only stay for a short while you'd better get started quickly! But once we were there, there was a lot of metalworking to do. Mick was set to work on some scaff connetors, and a drill bit that currently didn't fit any of the drills. While he was at it we heard a big roar; that was Miles arriving in a big Landrover. Then not much happened. I was getting impatient! I suggested Miles and I head up as we would be in the other dig anyway, but he was being nice and offered to take all the kit up. That required the kit to be ready for shipping.

I practiced my patience, the metalwork got done, and we made our way up. We dumped some firewood Miles had in the back of his car at the manager's cottage, and then dragged all the kit (scaff ect) to the entrance. Then we were in! I grabbed a scaff bar and walked in, but halfway to the pitch down I realised I wasn't carrying the only item that was meant for our dig. I went back but all was well. Time to chuck all the metalwork down and follow!

I was in our dig in no time. Miles popped by to tell me he would first sort some electric stuff, so I first put the scaff foot into position, largely cleared out the rubble of last time's blast, and went into the front of the dig. I lugged the blue tub in, and started to load it up. I wanted to make the space just behind the squeeze big enough to turn around. That would help! 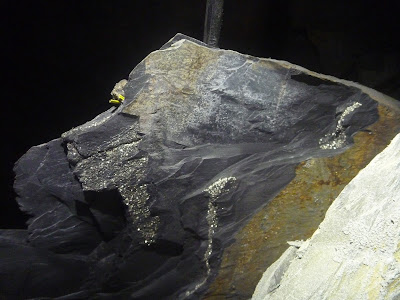 Some pretties unveiled by blasting: nice layers of pyrite crystals in the slate. Notice the two snapped-off yellow wires of the charge sticking out!

After a while, Miles appeared and emptied the tub for me. Then I had a go at turning around; it worked! That allowed me to try to get rid of some annoying rocks in the floor. Two big ones came out! Success! I pushed them back, and pulled some smaller ones out. I started throwing them over the edge of the squeeze. I was slowly burying myself! But the end of the dig was getting roomier. One could almost follow the wall to the right! Unfortunately, we wanted to go left.

Then I heard a voice. Edwyn, who had mailed he wouldn't be coming, appeared! He started throwing all the rocks I had cleared out away. This worked fast! I tried to clear things out from further down as well. That's a hassle due to the restricted space. At some point I hurt verywhere and my head seemed to be falling off. I wanted a breather! That also allowed me to have a cup of tea, and Edwyn to have a look at the active end of the dig.

He managed to get in, and with some effort, also got out. That squeeze is so much bigger than it was but still not big enough for most of the men! The time was going towards leaving time, so I thought I'd go in and take pictures of the situation. I could see Edwyn had removed a few more rocks. Progress! I took pictures of pretty much the whole situation while Miles had another attempt at widening the squeeze. 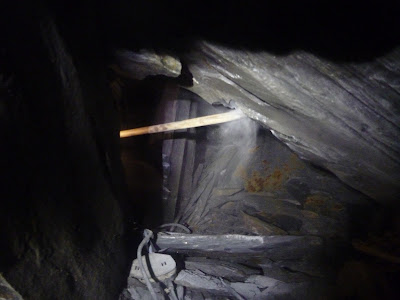 The view from inside: a disembodied drill bit at work at the squeeze

When he was done with the drill I borrowed it to try to get rid of some annoying lumps in the floor. The first one yielded after some effort; another one resisted, as I could not get the angle right. It's a bit smaller now though! And I drilled a hole in a big bugger, with the thought of detonating it later. The Simon appeared, mentioning Phil feared he was turning into a pumpkin. Time to get out! Time flies and such.

I crawled back. Miles suggested I'd blow the thing up, but I said we'd skedaddle. Too bad! But there will be more opportunities. I think this dig needs quite a lot of blasting, and I suppose I now am the most likely person to do it. I fit best into the space, and I've seen Miles set up blasts a few times now, and I think I could do it too! More next week!
Posted by Margot at 08:41