When I go for a run somewhere new, I sometimes trace my steps afterwards in Map my Run, or a program like that. Gives you an idea of how far you went. But then one day I was talking to Mike, a rather tech-savvy friend of mine, and it dawned on me that what I do is a bit odd. The idea is, evidently, that you bring your phone with you, and it records your run while you are at it. Aha! What a time to be alive. But realising that didn't change anything; I still tended to run without stuff in the morning (just a key) and with only a camera when I do something more elaborate in the weekend. The camera is water- and shock proof, which makes it a good running companion. But well, if one has a smartphone, why not bring it and see if it says interesting things. If one runs in the woods or the dunes it can be impossible to find out where exactly one has been. And the ladies with whom I ran the Parkrun some time ago mentioned you can link to other runners on a running app, and make solo running a bit sociable by proxy. So I thought I'd give it a try and I ordered an arm strap for my phone. That was never delivered so I ordered one again. And I tried it! It told me where I had been before I had had a chance of bringing the map out. I also knew how my speed had developed. It's OK! Might do that again. I'm not quite used to the app and it takes me some faffing to set it up and properly close it down, but I'll get used to it. I'm catching up with the times again! Slowly... 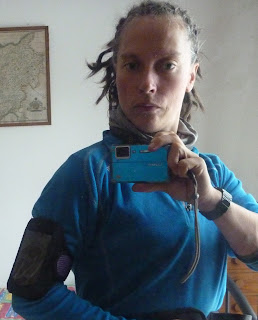 The arm thing with phone in it
Posted by Margot at 09:09