Lots of fun in the dig

Digging is rather addictive when it's going well! And last week I had better things to do, and I wouldn't have wanted to be down there given what the alternative was, but I was glad this week I could go back. The last time I had got a bit stuck (metaphorically, fortunately) at the squeeze; it was so difficult and uncomfortable (if not painful) to go through, it did not motivate to go in and make progress. But there were positive signs! Miles had mentioned he would be in there in the afternoon, and I hoped he would make the opening bigger. He's got a breaker and access to explosives, so it should be feasible. It would set me up for a lot of rapid progress!

For the other dig we needed scaff; both Phil and Mick had some, and we would have to take it up. David wasn't looking forward to lugging it all up, but I suggested we recruit Miles. He tends to drive up, and then bringing scaffolding poles is a trifle! But Miles said he currently did not have a suitable vehicle for the steep and uneven track up, so he couldn't help us. Oh well! We have hands.

The Anglesey contingent arrived at a deserted parking lot. Oh dear! No Miles vehicle there. That meant he either had managed to repair a vehicle, or that he wasn't there at all. What to do? Our dig really really needed that squeeze widening, and for that we needed a breaker. David had his; I figured I should carry it up, as there would be no point being there if we had none. There was the risk I would carry it for nothing if Miles would be in there anyway, breaker and all. I decided to take no risks. It meant I would be heavily laden; I would have my usual stuff, plus the very heavy breaker, plus a scaff bar (doing my bit for the team), and I also carried SRT kit as Miles had mentioned a cable needed retrieving from a level above our digs.

We walked up, and saw Miles' Landrover there. Good news! Even though it might mean I was carrying that breaker for no reason. We went down; from the top of the pitch I could hear the generator, so I knew stuff was happening. I left the breaker with the generator and went through to our dig. That was an unusually luxurious thing to do: Miles had installed festoon lighting in the level, and at the dig he had an iPod (other music carriers available) playing ska. Spiffing!

I found Miles trying to get rid of a dangerous-looking rock at the entrance to our dig. It wasn't budging! We decided to support it instead. Then we needed to make a plan for attacking the squeeze. We decided on trying to use the breaker to make the step lower. Miles would take the first turn. I couldn't really see what he was doing but he handed slabs of rock back to me from time to time; that was encouraging! After a while he withdrew and I tried to get through. It was a lot easier now! But I still couldn't turn around. I handed a few rocks back, trying to make the space a bit bigger. Then I went out, turned around, and went back in; we'd try to chip a bit more off the edge, and that was, in theory, best done from the inside. Practice was a bit more complicated; I could not position myself in such a way I could easily do this. With combined forces we made some progress anyway. 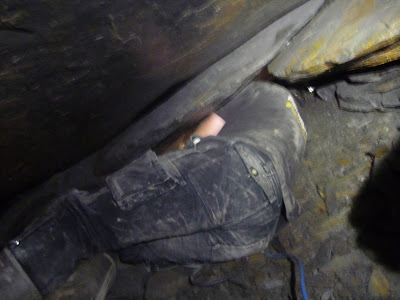 Miles uncomfortably chipping away at the squeeze

In order to get from just beyond th squeeze to further down, one had to get past three annoying rocks. I wanted to get rid of these, to make it easier to proceed. I lugged one out, and handed it to Miles; I assumed he could just slither to the squeeze, accept the rock, and bring it out. The sounds he made while doing something like that were suggestive if it not being so easy. For him, there was another squeeze! He decided to do something about that. He started drilling holes for explosives while I tried to get the other rocks out. One I managed, by pulling it loose, passing it past my body, and kicking it through the squeeze with my feet. The other one wouldn't move. I went to the far end and had a look. Not sure where to go next! But clearing out some more rocks would help. And from now on, that would be easier.

I crawled back out and showed Miles a picture of the end of the passage so far. He was making good progress with the drill holes, so I figured I'd come out, eat an apple, and wait for him to be done. Soon he was; when all was ready for detonation we had to retreat. I figured I'd retrieve the aforementioned cable from the level up; Miles went to the other dig to warn the others he'd blow stuff up.

I went up the rope I had never before noticed. Nice to see a new part of the place! And the slope went up to some scenic manway, which lead to some roofing shaft-like passage. Cool! The cable was easily found and I came down. To my surprise, lots of people awaited me. I thought the people in the other dig would dig forever! But I'm all happy with an early end. 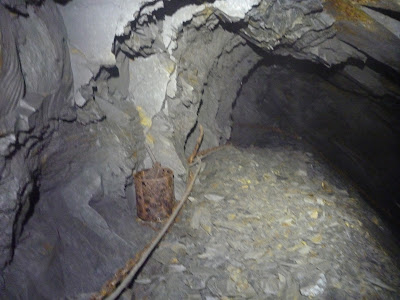 The manway with artefacts

Miles had bought a thingy which was pretty much just a box with two thingamajigs you could connect a wire to, and a button on it. For setting off his explosives in style! Before he's just connected the wire to a random battery. And now he handed it to me; I got the honour! That's cool. I connected the thing up and when all were ready I pressed the iconic button. A satisfying "FFOOM" followed. Done!

I though we'd head off but David wanted to try out his breaker, which had seen repair of which he wasn't entirely sure if it had been successful. While he did that I saw Llion head towards the dig. Not without me! Together we inspected the results. That rock was now dust! We went back.

Soon all were done and we headed for the exit. I asked why so early; David explained they all hadn't wanted to be behind the first collapse when the blast came, so they had basically been chased out. I hadn't thought of that! Worked well, though.

On top of the way out I had a small discussion with Llion about why both Dutch and Welsh are better than English, but then it was time to go out entirely. Another exciting night! They rarely come this good; company in the dig, and music as well, exciting progress, blasting, rope work, new terrain, and an early-ish end. Perfect!
Posted by Margot at 08:47