The lure of the dig is strong. I thought there would be some people going this weekend! I didn't know if I would join; I have stuff to do, and I figured the Saturday could end late. Weddings do that sometimes. But things went differently.

While the messages were flying around about who would be available when, Simon suddenly drew our attention to the amazing weather forecast. It would be a cloudless day! A bit of a pity to lurk in a big hole. So Simon suggested we go to the Gwydyr Forest, which is Swiss cheese, and check out a few adits and shafts of which we weren't exactly sure what their nature was. I was won over! The Gwydyr forest is a lot closer than our dig, we would only assemble at lunch time so I would have the morning for chores, and Phil had to be home by six so it couldn't get late either. So we would have good company, underground exploration, an opportunity to enjoy the weather, AND it wouldn't take too long! I was won over.

I biked to Phil, met his cat, ate half his lunch and got into his car. Off we were! We met up with Edwyn, who had a cold and sounded very sexy, and Mick. And no Simon! It had been his idea but he had bailed out. Oh well; Mick and Phil had a few holes they wanted to investigate.

We set off in the glorious sunshine. We first saw some capped or filled shafts. Later we found a stope that looked so promising we decided not to explore it; there were some people not with us who probably would want to be there if we did. We then found a small stope I dropped into on a rope, only to find out I could walk out on the side. Through knee deep water! I would be sloshing the rest of the day. 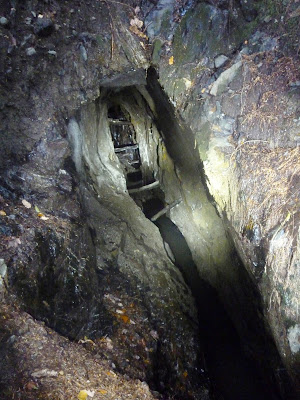 By then I was getting hungry, and Phil too, so we shared my lunch as well. Then we were on our way again. We later found a few more shafts and adits that were all collapsed or filled in with rubbish. Such a waste! I dropped one more stope (Mick and Edwyn were in it for the walk, and Phil politely let me go first every time) but that turned out to be filled in with discarded fences and similar unpleasantness. But by then it was time to get back to the cars. Phil's dinner was waiting for him! 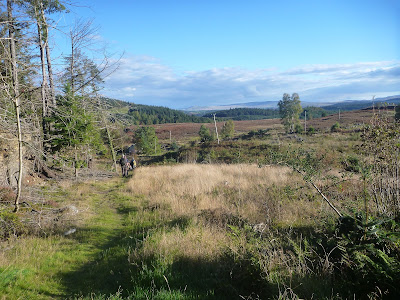 Three explorers in the blazing sunshine 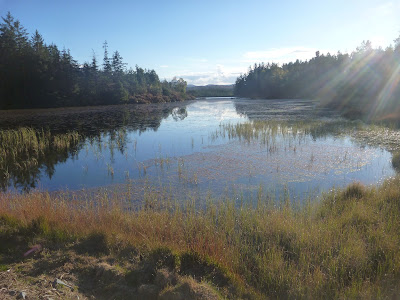 When we got home and mailed our exploits around, Simon (of course) mailed back he had already explored the bit we had found exciting. The bugger! He should just have come with us. But at least we had had a nice night. And David, in the end, never made it to our dig. Oh well! Let's hope we get to the digs soon!
Posted by Margot at 11:53