Return of the Cornish

If you live in North Wales all your caving friends will come and visit you. Next month the PCG will appear again. And this month, it was the Cornish! Not any Cornish; my old mates Daz and Mike. (I say old; they've known each other for decades so I'm a parvenu in their companuy, but still.) It was the second time this year; I'm being spoiled. They kept it a bit of a surprise until the end; they said they'd let me know on Friday whether they would indeed show up. They each have their own company and one never knows when a big order comes in.

That evening I went to the movies (!). Still no message when I came out! I texted them. They said they were here indeed and would text me the next morning. They had driven for nine hours and they were tired. Decision would come later!

That morning I got up to see I had a message already. It had come in almost an hour earlier! Oh dear. They suggested a mine and I thought it sounded fine. I quickly made some quick sandwiches and plonked my caving kit into my car. Just before I'd set off they phoned me to ask if I had a spare helmet. Luckily I did!

I got to the meeting point (I thought) and to my surprise, didn't find them there. Maybe they had been faffing? I waited a few minutes. Then I sent them a text, expressing I hoped we had meant the same parking lot. We hadn't! They were in the adjacent one. Oh dear...

We all jumped into their car and went to the start of a public path from which we would walk up. It was a wet day but Wales is also beautiful in the rain! And after a while we went in. I hadn't been in this place since 2014. I remembered little of it!

We had a lovely scamper. We just went where our fancy took us. We saw one incline after the other, we saw huge chambers, flooded at the bottom, we climbed up and down chains and whatnot. It was great! We also sat down against a comfortable slab for a bit of lunch. 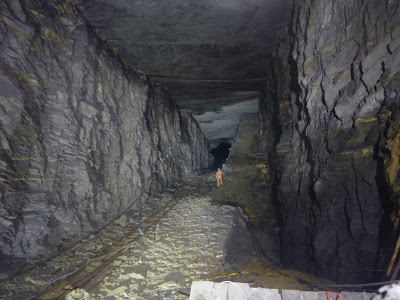 An impressive incline with Daz for scale 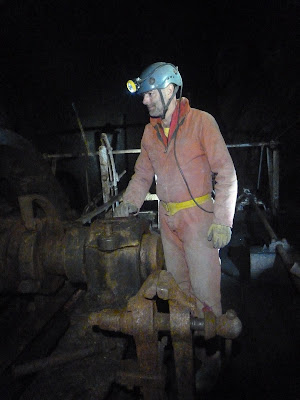 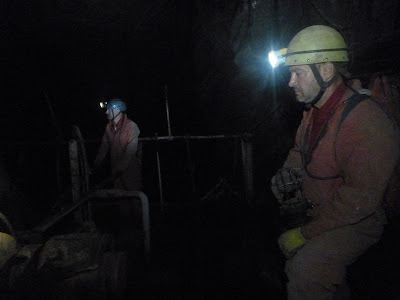 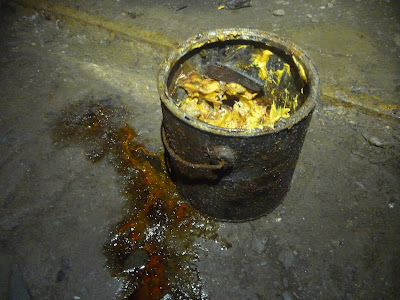 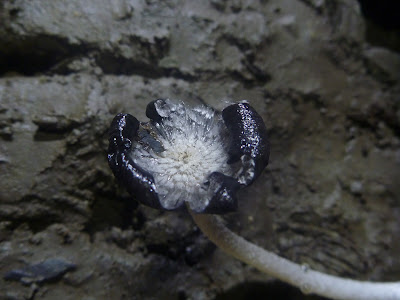 After a while we got hungry and partial to a cup of tea and we headed towards the exit. That took a while; we were quite deep in and we only approximately knew the way. Sometimes we followed arrows. When the arrows sent us around a loop we just dropped a level and tried again. And it worked.

When we got out we walked back to the car, retrieved mine, went to their accommodation, had a cup of tea, and went to the pub for dinner. We were hungry!

It is always great to see these men. I hope I will stay here a bit and see them the next time they show up! It's great to do nice efficient scampery trips as they are so much more efficient than trips with large groups with slow people in them; with a small fast group you see so much more. But just seeing men like that is good anywhere. I hope to see them again soon!
Posted by Margot at 09:21