The previous time I ran a Parkrun, I came in as the fourth woman. That made me want to run my way into the top 3. Who wouldn't? I wasn't half dead at the finish so I suppose I could give it a bit more next time. And especially after running a clanging personal best on the 10k, I figured I had a good chance.

A few Saturdays I had been otherwise engaged; now was the time to aim for the podium (not that there is a podium at Parkruns). I biked up and took my place at the start. I made sure to not be too far away from the front! And I started fast.

I soon noticed two ladies in pink in front of me. I hoped I would managed to overtake them. I had no idea how many more women were ahead; it's hard to get an overview. But I kept up the pace and the pink ladies slowly came closer. I was breathing heavily but I supposed they may be too.

Penrhyn Parkrun is two big loops and two small ones; I ran the first one slowly closing in on the pink ladies. And the second too. I can't remember whether it was the first or second small loop I managed to overtake them (they were running quite close together) but I managed. They didn't seem to manage to catch up! And I was getting tired; I sounded rather disconcerting by the time I rounded the last corner and got the finish in sight. But I thundered over the finish, and saw I had stayed within 23 minutes. A personal record! By a lot! I saw I had come in 29th (they give you a thingy with a number and a barcode at the finish; combined with your personal barcode it documents who ran what). I couldn't remember my overall position the previous time so I didn't know if it was good. But I clearly had run fast! And when walking away I had a small chat with the second lady. She was nice! 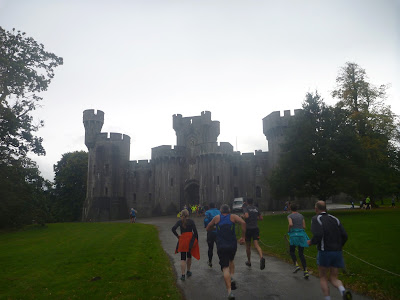 Penrhyn Castel, venue of both start and finish, and photogenic as ever
Posted by Margot at 17:51