On with two digs

Our digs are now so exciting we keep gravitating towards them. This week, like (part of) last week, we went to visit them. I was keen on pushing further with Miles's dig; I had crawled in to some loose stuff at the end of the previous visit, and I was keen to see what would happen if that loose stuff was removed. Miles himself is less keen on crawling so I figured he would be quite keen on someone else doing that. And it wasn't just me keen on returning to Cwm; our own dig is also still going well, and we had some guests wanting to just have a wonder around. Three reasons to go to our regular haunt...

I was the first one down. I thought I'd wait for the next person, which was Edwyn, to say what I intended to do. When one crawl deep into a collapse it might be good if someone at least knows about it. Edwyn decided to come with me. Before I could say "slate" he was headfirst inside the crawl, crowbarring away at a rock in the ceiling of the crawl to see it it was robust. It was! Then it was my turn; I went in to get rid of the loose stuff. While at it, I decided to also remove a rock in the floor which made it hard to pull rocks back. That was hard as it was heavy and there wasn't much manoeuvring space. I asked Edwyn to give it a go. He figured we needed a rope. 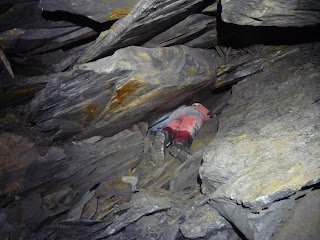 Edwyn getting into the dig 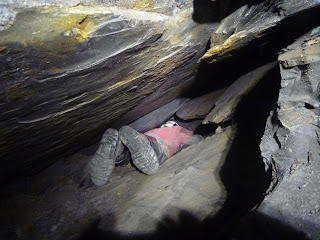 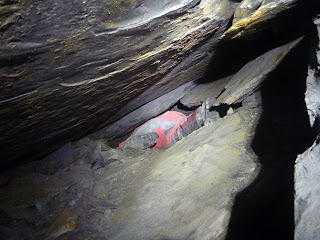 I scampered to the other dig as I knew there was some rope there. When I got back Edwyn was tackling another rock entirely. It was the one I had reduced with the breaker. It stood no chance against Edwyn! Then it was the turn of the other rock; soon that was gone too. That made the crawl a lot more comfortable. But now it went to a place with a marked change in style; we had hit a big rock with much smaller rocks behind it. These were the size you can easily remove, but they would have to go back a fair way, and there is't much space to do it. We would have to think about a strategy. We figured it was time to see what was happening at the other dig!

When we got there we found David who hoped we would have brought the large roll of wire with us. We hadn't, so I went to go and get it. Then I sat down for a bit of dinner. And after some general small talk I figured time was passing and I knew David wanted to put connectors on the wire. I suggested Edwyn and I do it; Edwyn is an electrical engineer so I figured getting him involved might increase trust in the work; I sometimes cut corners a bit when working with electricity. David thought it was a spiffing idea, so off we went.

It took me about three seconds to freak Edwyn out. We had a stanley knife to strip the wire, and I handle knives in ways H&S-focussed people can't stand. I admit his knife-wielding was exemplary. Mine gets it done too! Slightly hindered by the presence of only one knife and only one screwdriver we got the work done. Then it was time to go up; we'd meet the other group at 22:30 at the entrance.

Impatient as I am I was the first to get to the entrance chamber, where I met the others. They were keen to go out! It wasn't 22:30 yet, but I had the key, so off we went. They went down to get changed and I waited for the others. It was nice! I ate an apple, leant back, and stared at the Milky Way. Very idyllic!

Will we go back next week? No idea, but distance makes the heart grow fond and I am actually starting to itch to get my hands on that pile of small rocks at the end of our progress. And our own dig was going spectacularly well too: these are exciting times!
Posted by Margot at 09:01