I had spent a lot of time preparing my talk on how the irregularities in the orbit of the Earth influence our climate. Then the day came I had to present it. I had to get up rather early; it's a 1:40 hour drive, according to Google Maps, if nothing goes wrong. I wanted to have some time to account for traffic jams, loo breaks, and/or getting lost in Manchester. I left at 6:30! Luckily, the roads are empty then. I was glad to have left early as my satnav thought it was not a 1:40, but a 2:30 hour drive. Oh dear! Luckily it wasn't true and I got there in good time. I quickly found the building, went in, and found the organiser. I checked my talk, and uploaded an animation I hoped I wpould have time for. Then I could sit down and wait to be introduced. 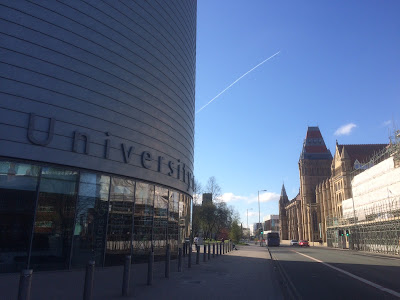 The venue (on the left)

It wasn't very busy; it seemed that this year, the timing wasn't too good for the schools. Oh well! It's about quality. My lecture went well, but I struggled to get a response from the audience. Nothing new there, but as the must have been the nerdier kids in the various schools, it could have been better. Oh well. Maybe in that sense, being the first speaker wasn't ideal; maybe they'd loosen up in the course of the day...

After I was done, a gentleman called Ernie Rutter took the floor; he spoke of landslides in general, and then about Mam Tor, a rather scientifically interesting one, in particular. I had never heard of the thing but I learned something!

Then there was a coffee break. I had hoped lots of students would come to me with questions, but only one did. He asked about Snowball Earth; a topic I had not talked about, nor had intended to, but that the organiser had sneakily added to my talk title. That was a quick discussion! Nobody wanted to know about studying in Bangor. The best thing was that at the end of his talk I had asked Ernie a question; he didn't know the answer, but now one young man came up to me. He had done a project on the topic and knew the answer. Great!

Then we went back; now it was time for a talk on metamorphism by John Wheeler. He was very engaging! I haven't done metamorphic geology since the mid-nineties so it was nice to brush my knowledge up again.The day was closed by Charlotte Jeffery Abt, who was essentially giving a talk on historical geology. I like that. Then the day was done!

I figured I might walk into town, munching on a sandwich, but that changed. Another Mancunian who had attended, Kate Brodie, asked me if I'd join for lunch. Well that sounded nice! I would. The locals dropped soem stuff off in their offices while I admired the displays I found in the hallway, and then we were off to the Kro Bar. 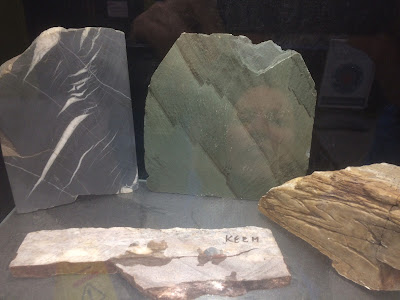 Nice displays in the Geology Department

I figured I might as well just eat hot lunch there, and use my packed lunch as dinner. Good idea! It was nice to have a chat with the others, even when the topic of conversation seemed to creep back to metamorphic geology rather often.

It was half past two when we left. I got back to my car and drove back. This time the roads were less empty! It was around 5PM when I got to where I had decided I'd stop on the way back, to get some fresh air. One of the hills next to the A55 looked nice but I'd never walked it. Now I could! I quickly got out of my dressy shirt and into some more appropriate kit. I didn't bother with changing trousers or shoes. It'd have to do! It was a beautiful late afternoon. 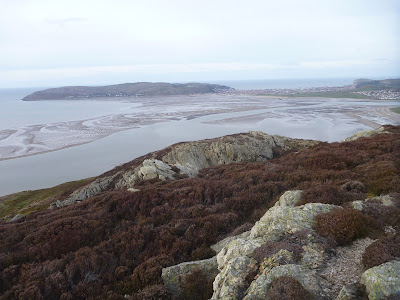 The view fromt he hilltop 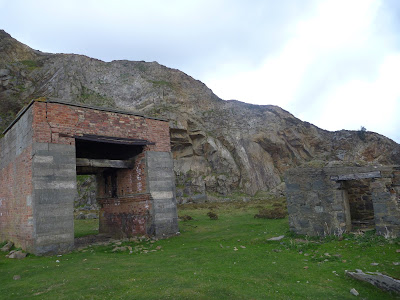 An old winch house on the left; this one is rather conspicuous from the road. Now I've properly seen it!

I ended up walking around for two hours. Nice! But then I figured I'd go on, past the supermarket, and then home. With this day out of the way things woudl be a little more relaxed!
Posted by Margot at 09:42