Make the trip round

A long time ago we had had a look at a small nice mine. That was only my third trip with the Thursday Nighters.We had found a lower entrance and an upper entrance; between the two, there was an almost featureless, steep slope. The features it did have were soem holes. We figured if we stick metal pegs in these we can just climb on those and make it a round trip! And that had been on the "to do" list for a fair while, but now, finally, we cwould get around to it. The time was right: it would be a sultry evening, so a trip with lots of walking to and from the entrance in the beautiful landscape, and not so much time spent underground, was a good idea.

Getting there was a chore; I had a car full, and the road was steep. When some sheep crossed a steep part just in front of me I had to stop, but the car struggled to do a hillstart on such a gradient. Even with only me in it. The rest of the road it complained. I was getting worried. Instead of changing clothes we first had a look at the engine! David found nothing amiss. I kept my fingers crossed! 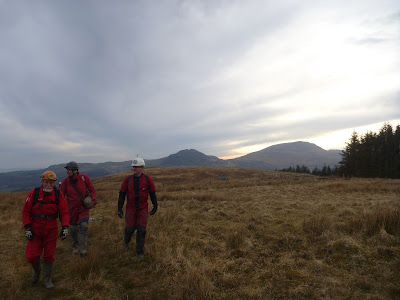 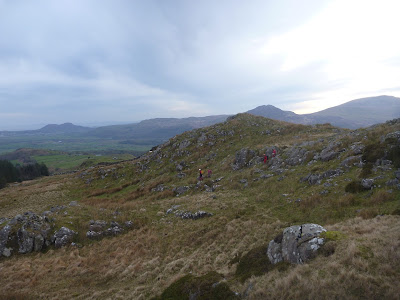 I had made sure this time I was not in my furry suit + caving suit. Way too warm for the walk up! It was quite pleasant to scamper around in some hiking trousers. When we  got there soon the pegs were in place! And immediately, Simon was on them. The top peg was still a bit below the top of the slope, but a sling hanging from that peg sorted him out. He was up! Now he could put a rope in place for the less daring and/or athletic. 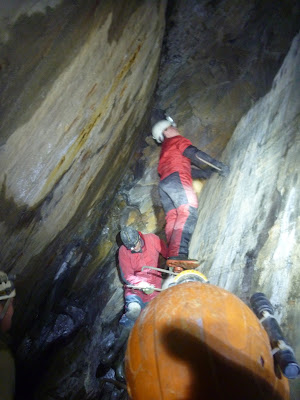 Simon making his unaided way up

Not all were less daring and/or athletic; Edwyn had an Edwyn moment and decided he didn't need any pegs or ropes or whatnot. He just free-climbed the edge. It looked scary but he did it! 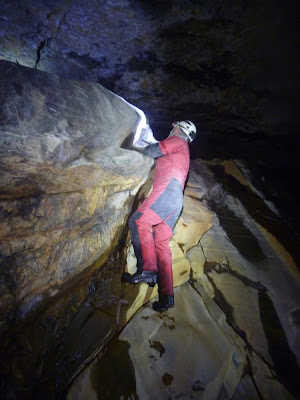 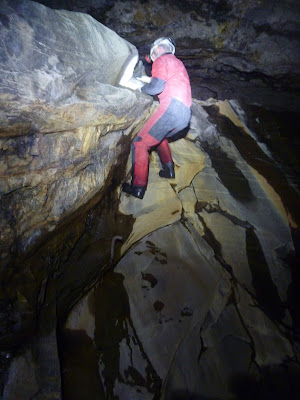 When the rope was in place I went up. I had my hand jammer on it. I'm not Simon! And when I was up I waited for Don who shot up, and then checked the available passages, which weren't many. 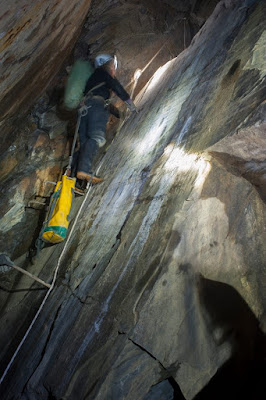 Me on the slope; pic by David 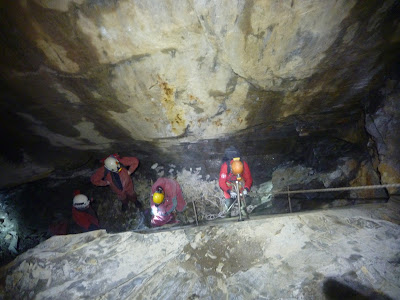 The others seen from above

I then went back to see if anyone needed some talking up. Nobody did! Paul was struggling, but it was later disclosed he wished people to just shut up and let him get on with it if he does. As I only found out later I did hurl some encouragment, upon which David started to hurl discouragement at me, which all didn't improve anything but which was soon afterwards resolved. In the meantime, other Dave did the trip in th eother direction, as he expected fewer queues that way. He was right!

I then figured I'd go out. I did. Noboby followed. I climbed back down, but just then the others approached (of course). I went out again, and checked a half-flooded passgae I had explored the previous time, but of which I didn't remember what I had found. This time I found newts! A nice surprise.

When we were all out we first just enjoyed the nice views but then we went back. Early enough for a pint in the Ring! And the car didn't complain any further. It had probably just been me. Anyway; a good night overall! And we've given North Wales the smallest round trip it's ever had...