It's a book from this very millennium, so it could at best be a modern classic. But I read it! I am engaged in a long-term project trying to read the books that have made a big impact on the world; the last one was Ulysses. Cloud Atlas can't boast on anything like the status of that tome, but it came recommended by Roelof and that makes it enough of a classic for me. I started reading on my way to Norway. 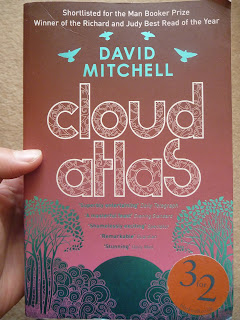 I had little idea what to expect. Roelof had explained it first moves forward in time, from the 19th century in five steps to an unidentified future, and back again. That sounded strange but it worked. I liked how the various tales were connected; rather elegantly, I'd say. I liked some of the chapters better than others; it starts out rather modestly, which I like, with the main character just ambling around a bit, waiting for things, exchanging small talk. My kind of story line! The second chapter, in the early 20th century, isn't too spectacular either. I had a bit of a scare when, compared to the first two chapter, the thisrd one which plays in the seventies turns into a bit of an action movie with all sorts of things that go bang and boom and splat. From there on, the calm level of the first two chapters is never equalled, but it was still fascinating.

The author doesn't show you such a long time line for no reason, of course. There is a clear message in the book on what's wrong with society. It isn't forced down your throat, though. Having finished it some week ago I am still pondering how it all hangs together. Not technically; that's quite flawless. But how the various characters carry the story. It's a good thing if a book keeps you thinking!

I know a film was also made; this did not come recommended to me, but I have read that in it, the same actors keep on coming back, in all the various time periods. I liked that touch! The book did not suggest such a thing to me but it sounds like an elegant addition.

If I manage to live many decades more I might find out if this book will make it into the ranks of actual classics. Do I think it should? I'm not sure! But I'm glad I read it.