In order to give some recognition to those who do make the effort of tackling this rather difficult language, the university had organised a ceremony for staff who had passed a Welsh exam in the past year. This ceremony, of course, took place on October 15th; this is the (for foreigners rather inexplicably) named Shwmae/Sumae day, the national day for celebrating the Welsh language. Sut mae, which gets abbreviated in many ways, means so much as "how are you?"

I went. It was nice to hear the VC give a short speech in Welsh. He did read from a sheet, though! My Welsh teachers told me he shouldn't have. His Welsh is good enough. But he got nervous. It clearly happens to the best! And then we got our certificates. I was the swotty kid who got two. 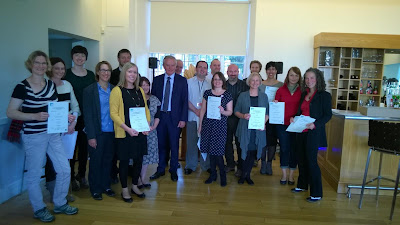 All university staff who came to the ceremony to get their certificates, with the VC in the middle (with tie). Picture from the learn_cymraeg Facebook page

After the ceremony I had a small chat with a chap who was in a Welsh class I had left in the meantime, two people rather heavily involved in PGCert and such things, and my current two Welsh teachers. I also got interviewed as my two diplomas made me an easy target for a position as poster girl. And then it was time to head back to the office. 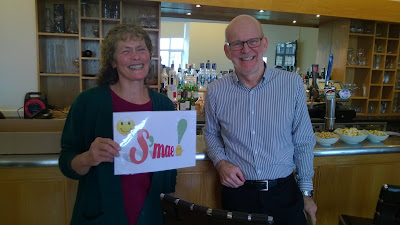 My spiffing teachers: Jenny, with whom I practice conversation, and Elwyn, who teaches the course I'm in. Picture from the learn_cymraeg Facebook page

I should be back next year with my A level. But that takes a lot of effort more! We'll see how it goes!