No, we're not dead

You sometimes read in the papers that hikers or runners (or cavers, for that matter) get into trouble, and the world first noticed this when someone reports that a car spent a suspicious amount of time at a remote location. Not everybody tells someone they are heading into the hills. And sometimes rescue services then can do no more than retrieving a body.

Sometimes, though, the alarm is raised on the basis of an abandoned car, only for it to became clear later someone just decided to go on a long hike and didn't tell people. That's a bit embarrassing! You don't want to return to your car and find tens of people making an awful fuss over you just having had a jolly in the mountains.

When we go hiking in the mountains in later this month we intend to leave our cars in the middle of Snowdonia for days. Someone might notice and think we are lost! So I have been excessively responsible and I notified both the police and mountain rescue they shouldn't worry if they get a phone call about our vehicles. It feels weird, being so prepared! 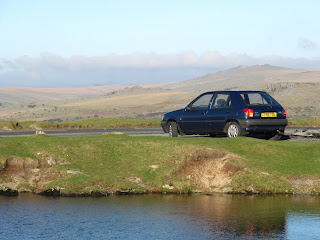 Old pic of my car on Dartmoor. A car left in a place like that may attract attention!
Posted by Margot at 14:59