I have another half marathon coming up and I should sometimes squeeze in a longer run than my normal pre-work round. And long runs are the best when they're beautiful (well, short ones too, but sometimes you just want to squeeze the whole thing into a neat half hour). I had admired the region around the tiny village of Rhyd Ddu many, many times, as quite a lot of mines lie beyond the road that runs through it. Bwlch y Plwm, for instance. So after another reminder of the beauty of these hills on Thursday I decided to go for a run there in the weekend. Google Maps had shown me a broad path going up rather gently; another old tramline, no doubt. Perfect for running! And at the end, or rather, at the highest point, there would be a slate mine waiting. The typical waste tips were clearly visible from above.

When I woke up I saw the weather was lovely. Great! It took me just over 30 minutes to drive to Rhyd Ddu and I parked on an as good as empty parking lot. And off I was!

I was a bit blinded; I ran straight towards the rising sun, but that only made the landscape seem even more magic than it other wise would have done. It was as beautiful as I had imagined! Just bare grassy hills with a few sheep. And the path was perfect for running uphill. I had a blast! 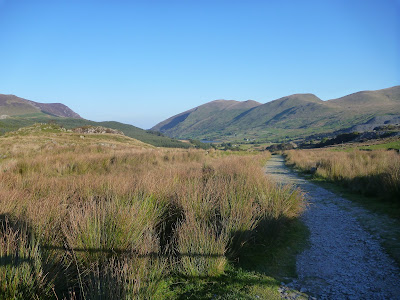 The greener start of the path 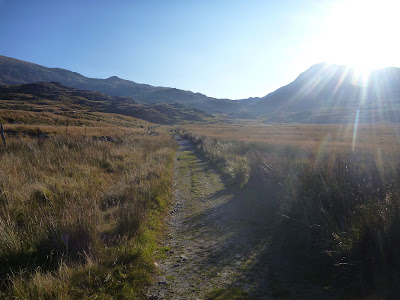 Sometimes I stood still just to look around and listen. There were no sounds other than the gurgling of the stream and the occasional rustlings of sheep. Higher up birds added to this minimal music. I'm still getting more fond of spiffing Snowdonia.

When I reached the outskirts of the slate quarry my tempo immediately slowed down to near zero. Things to see! Holes in the ground! Big waste tips! Ruined buildings! Tram tunnels! And even some adits. It will be interesting to find out who knows what about this place. Would it be worth scampering into them? 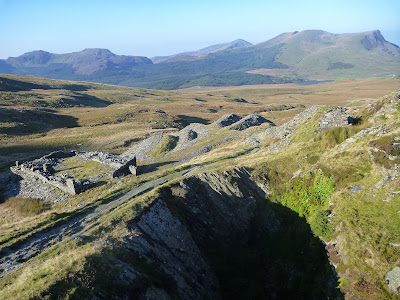 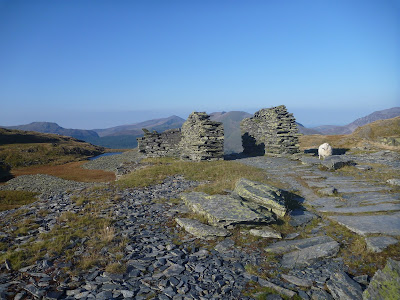 Top of incline with sheep

I went to the top. The view to the valley on the other side was amazing! But I decided not to go any further; I had already spent an hour and there was more to do. I turned around and went back down. And the path was slightly less suitable for running downhill then uphill but it was still very nice. When I got back to the parking lot it was mostly full; the rest of the word had clocked on to the nice weather a bit later it seemed! I drove back and was home around 11. Plenty of time for doing some PGCert! 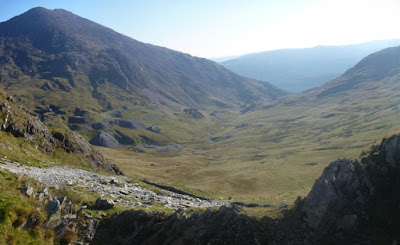 The view into the next valley
Posted by Margot at 14:15