I thought I'd do lots of long runs again after the cruise and the Greenland trip. But then life happened! All weekends were full of either chores or underground adventures. But then Gordy reappeared on the scene; he was one of our postdocs, but near the end of his contract he had gone back to the States where he is from, and where his wife lives, to write up. But he had come back! For several weeks. And he had suggested we rekindled an old (be it rather short-lived) habit: doing long runs together. In spring we had both been in training for a long race, and done two big training runs. The first one was rather hard as we had probably set off too fast, but the second was spiffing! Worthy of repeat.

I had long wanted to run the tramway from the Blaenau slate quarries to Roman Bridge. As we visit Blaenau an awful lot for undergroundy reasons I had seen the tramway time and time again from the road. This may be the time to go and run it! Gordy agreed.

We decided to try to park at the Roman Bridge railway station as it was pretty much the deepest part of the route. It would be nice to get the uphill stuff out of the way first! And so we did. The route would first go through some woodland, then a little distance along the main road (hard to avoid), and then onto the tramway. Then at the end there would be some farmland and then we'd be back.

We ran into the wood. There was a logging road on the map, and it was there in reality too. It seemed to soon stop though! We decided to try to pick up another logging road, indicated on the map, and run a slightly altered route. But withing minutes we were in the middle of an almost impenetrable forest. In hindsight we should have turned back! But we didn't. We ploughed on. When we were lucky, we were trundling through deep soft moss that was often knee-deep and sometimes deeper, and which hid sloshy ponds. When we were not so lucky, we were wrestling through abrasive shrubs like heather and gorse, and it was a warm day so I was in a singlet and shorts. When we were really unlucky we had to get through areas of spruce; these bloody things grow so close together, have such dense branches, are so spiky and grippy the only way to make any progress was to go as low as you could. I went on hands and feet, as deep as I could; I was almost belly-crawling a lot of the time. It was awful! And spruce branches are the spiky half of velcro, and I am the fluffy part, so all that time all the branches grabbed my hair and I had to forcefully pull myself loose every centimeter of the way. It was awful! Luckily we had our ears to guide us; we could hear the road, so at least we were always sure of the direction to head into. 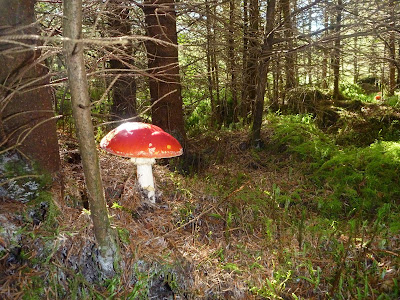 
And then I saw light! I crawled towards it; it finally was a logging road! Heaven! I crawled into it sanctuary and enjoyed the sudden freedom. Gordy appeared too. We then spent quite some time trying to get all the pine needles out of our hair, clothes and kit. Blimey! My hair was very fluffy due to the endless pulling by the spruce branches, and twice as heavy due to the added load of needles. My skin was gone. Oh dear. When we thought we were ready to go again Gordy requested a few more stops to get the needles out of his underwear. There is a place for pine needles and that is not it!

We soon came to the main road. We now had to follow it further than intended, but we really didn't want to go back into that wood. It wasn't very pleasant with lots of traffic on this beautiful day, but it was fairly quick. And then we reached the tramway!

The path was wetter than I had imagined but we both had soaking shoes anyway from our wood adventure, so we didn't care. And for the fist part we still had the noise of traffic in our ears, but at some point the tramway turned around a corner and then it was quiet.

It was a lovely valley! The route was littered with ruinous buildings. We also saw what we thought was the ventilation shaft of the railroad that went straight through the hill under our feet, but we couldn't look into it. And we came across a nice old bridge over the river. We didn't need to cross it, but we had a look anyway. And then Gordy looked longingly into the water, and around to check for people, and suggested we jump in. Excellent idea! 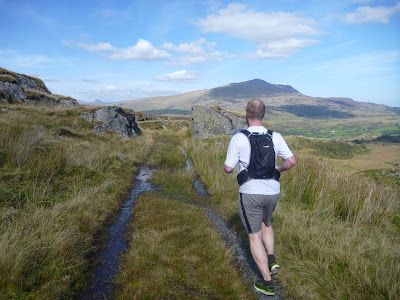 Gordy on the tramway 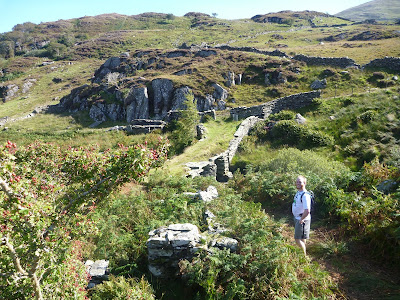 Gordy near the bridge 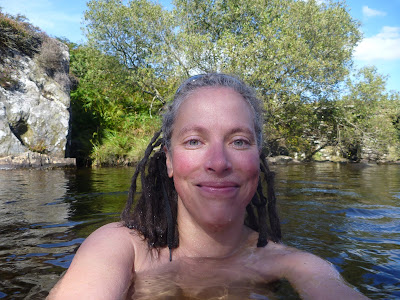 
We came out all refreshed. And continued our route! It wasn't very far anymore now. But  by the time we reached the car more than three hours had passed since we had left it. I had guessed it would take about one and a half! Oh dear.

We got in and headed back north. On the way in we had seen Dolwyddelan castle, and made the plan to pop by on the way back. We decided to stick with the plan! It's a castle built by the Welsh, and these had a lot less money than the English at the time (this is a 13th Century castle) so you can see it rather quickly, quite unlike the big glamorous castles Edward I had built. Into the main hall, up the staircase to the roof, and done! 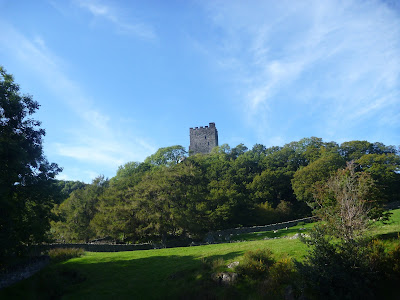 By the time we left the castle it was past three and we were very hungry, so we decided to stop by in tourist trap Betws-y-Coed, the next village up. We found a place that sold organic food and went for it. It was great! And by then we were easy to please, but I think even less hungry visitors would be satisfied. We topped it off with some ice cream, crossed a suspension bridge over the river we hadn't previously known about, and finally headed back to Menai Bridge. It had been a good day! It had started rather awful, but redeemed itself. It was Gordy's last full day in Wales and I hope it was a worthy goodbye!
Posted by Margot at 08:53