Another day in the field

I love the mountains. I love teaching. Does that mean teaching in the mountains is the best there is? Well, not entirely. It's great, don't get me wrong. But field trips with students are hard work. There is the teaching, which you have to do on the fly, without a powerpoint presentation to remind you of things. And there is the issue of trying to get the students prepared. And the logistics. Will they all show up? What to do with those who don't? Can they all walk up the hill at a reasonable speed? Will they re-emerge after lunch? Will they all do intelligible measurements? Will it rain? Will it be so windy they can't hear me talk? Etc etc.

James asked me if I wanted to do the Ice and Oceans fieldwork again this year. I thought it might be a good idea. I might be able to get an idea of how to improve it, as in order to get my PGCert I have to improve something. Something to do with the Laugharne field trip would be another option, but there's no reason why one couldn't hedge one's bets. And as teaching in the field is hard some practice comes in handy. So I said yes!

As James taught the rest of the module there was a bit of uncertainty in who did what; who would arrange the rental cars? Who would register attendance? Who would find out if there were any students with medical issues? But nothing went particularly wrong.

As I would leave straight after the trip to go hiking with my Dutch friends I drove myself. That way I could scoot off as soon as the fieldwork was over. James and the other staff would see to it the students would be delivered back to the main campus. And there was a LOT of staff! We had two new lab technicians for whom it would be both nice and useful to get them introduced to the trip. We often call on the likes of them to help out. And we had a new PhD student who would be working on related stuff. But all these were too new to have registered as university drivers so we needed three drivers in addition to me and these three. More staff than you can shake a stick at!

When all arrived on the parking lot I suggested we'd set off. The drivers were still sorting out parking tickets but I figured the staff would outrun the students anyway, so I set off with the latter. But they were quite a fast bunch! Oh well. I waited until all were at the site and started introducing the topic. I showed the students how to use a compass, told them how and where to measure and set them off. And realised soon I hadn't been clear enough. Oh dear. Fortunately James knows exactly what is expected of the students so together we went along all the little groups and set them right. 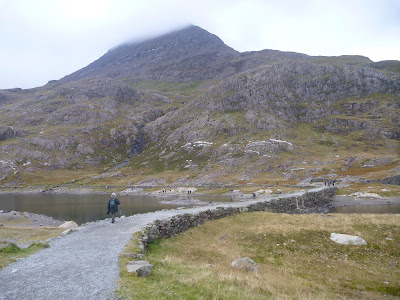 Students as little pixels in the field (and a random walker)


After a while all groups were done, so I gathered them all to do a bit of a debrief. Spontaneously a helicopter appeared. I waited until it left. And then it came back. And hovered above our site. No way I could drown out a chopper! I made the call to go back to the cars and debrief there. That worked! Then we were off to Llanberis for lunch. I was hungry! 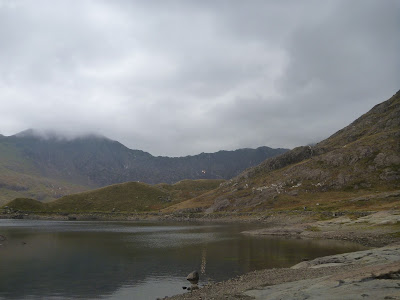 
After lunch we went to the beach for some clast analysis. I explained how you measure the angle of a clast with a compass-with-clinometer and screwed that up a bit. One is fallible after all. And then set the students off again! And then I checked all groups to see if they were making enough observations to make the measurements useful. Sometimes students forget to note down crucial stuff and then they are measuring for the cat's fiddle. This time I managed to nip a lot of such absentmindedness in the bud! And after a while many students were done. And some were getting cold and one was getting sore. Call it a day or wait for the slow ones? I was tempted to do the first. And then the students all started to gather anyway. I gave in! And delivered the final spiel. I did call onto James to add to what I said. It would be a waste to not draw on his spiffing treasure trove of knowledge! And then we could go.

I gave all the staff a hug and got to my car. I announced my ETA to my hiking friends and I was off! A reasonable day in the field!

I enjoy the landscpe on this trip. And I tend to enjoy the students. I had a switched-on bunch again! And I had tried to already establish some improvements from the year before. Then I had run around plotting the student groups on the map and taking the names of all students in these groups. Now I gave all of them a map and had them plot themselves on it, and write their names on it. Delegation is a good thing! And it worked! I got all maps back with the requested information on them. Excellent. I could imagine doing this again next year (for PGCert reasons); it's only going to get better!