When I started my job here in Bangor, the lab I use was run by a chap called Brian. He retired soon afterwards; Guy took over the job. But then one of the other technicians retired too and Guy started working full-time on absorbing this chap's knowledge before he'd be gone. So we got Jess. But Jess was engaged to a Canadian and they intended to go back to Canada after her bloke would finish his MSc. And that day came nigh. So we needed someone else yet again! And as I am one of the main lab users I was asked to be a part of the interview panel. I had been in the room during interviews, asking questions and presenting my opinions to the actual panel, but this was the first time I was actually expected to take the decisions.

Making a shortlist was more work than I had anticipated! On Monday I was given the document containing all the CV's and application letters by all the candidates. Soon after receiving this 169 page document I had to go off to be observed on the mainland. I also had a meeting scheduled with our new PhD student. And after that I had a meeting with Jenny to practice my Welsh. But I was expected to have a shortlist first thing the next morning. Oh dear. I was poring over CV's until 11PM. I distinctly disliked this task; of the 15 candidates, I knew four. I don't like having to reduce actual people to cold hard scores on selection criteria. It's easier if you've never met them! Not all acquaintances made it to my shortlist.

When I met with James to come up with a shortlist we had picked different people. We discussed a bit why we disagreed and then came to a compromise. Four people to interview by Friday!

There was a lot going on that week so I only finalised my set of interview questions sitting at the top of a winze in a lead mine. I had rushed ahead so had some time to think.

On Friday the denouement came. We started interviewing a chap who couldn't be physically present; we struggled a bit interviewing him initially as James couldn't get the sound working on the Skype call. We found a way around that, though, and thereby the interviewing took off. We only had half an hour per candidate so we barely had time to breathe between the interviews. The third candidate was quicker, somehow, so we had time to run off and get ourselves a cuppa before we'd see the last candidate. And then we were done. James called Jess in, who had shown all candidates around in the labs. 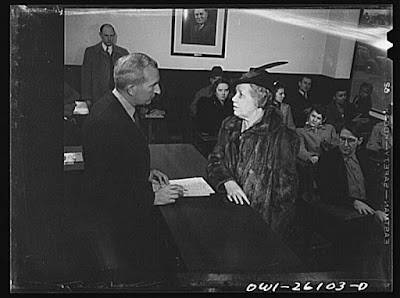 James and I both had two favourites and two runners-up. Only one person featured on both our favourites lists. So that would be the one! Jess was also impressed by this candidate. And he hadn't gone far by the time we decided, so James managed to retrieve him and offer him the job right away. Success! Soon the nice part of the process will start: working with this chap!
Posted by Margot at 08:46