If you plan a scientific project in such a way that it can be finished in time, you won't get it funded. So you have to promise the moon on a stick. If you indeed get the money, that's when the trouble really starts. Then you have to somehow deliver something that resembles the moon on a stick! But that tends to take time. I started my PhD in 2001; I'm not done publishing the results yet. I'm not done publishing the results from my time in Norway yet. And we're hardly getting started getting the results published of my first project in England; the one with the500 years of sea level change in the North Atlantic. One of the main issues was radiocarbon dating; when one batch of dates was in, we tended to be faced with new questions, which needed more dates to be answered. And applying for money takes time. Getting the analysis done too. So we are lagging behind, but not more than anyone with some sense of reality would expect. 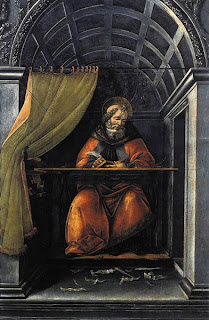 We all look like St Augustine (here by Botticelli) now: writing away....

Now we are in the middle of writing up; all four of us (Tasha, Antony, Roland and me) are writing at least one article now, all more or less at the same time. Tasha is ahead, with a review paper already having gone through the review process. I expect it to be accepted soon. And aside from that, we are quite actively slapping each other around the ears with draft manuscripts. Exciting times! I've seen Rolands draft on the four westernmost records, I've glimpsed Antony's paper on the Isle of Wight, and I've finished my Iceland first draft. With a bit of luck, skill and tenacity, 2013 will be the year when we spit out articles like there is no tomorrow!
Posted by Margot at 19:06

And I've got a very rough first half of the Scotland paper written too. Go us!

Topscorer of the season: Tasha Barlow!