Did we see Dovregubben in Dovrefjell? The question was asked as a comment on my Dovrefjell posting. So did we? But what or who is Dovregubben? And who wants to know?

The last question is easily answered: Dovregubben wants to know! Which brings us to the second last question. Dovregubben is the pen name of my former office neighbour in Tromsø: Jesper Hansen. He blogs under this moniker, and he's the only person I know who blogs more than me. Do check out his blog, if you're not taken aback by the fact he uses Danish to express his thoughts. And not only do I still read his blog; he reads mine too. Hence his question, when I wrote about Dovregubben, of whether we had met this creature. So who is this, whom Jesper named himself after?

Dovregubben is a character from Ibsen's work "Peer Gynt". He's a strong-willed troll king (are there any other troll kings?) He's the mountain king after which Grieg's composition of that name is named. And also the inspiration for Savatage's album of that title. Quite a popular character, evidently. (If you're willing to expand a bit on Dovregubben, Jesper, I'd be delighted!) He seems not to be from Dovrefjell but from Rondane, but let's not pick nits here. I had to look up what Dovrefjell even means; "dovre" seems to be a derivative of "dofrar" which means so much as "cleft". And nobody seems to know what cleft the whole area is named after.

If you know Jesper, you might not be too surprised about this moniker. And did we meet the original Dovregubben? Maybe! He seems to have kept an eye on Marijn, as he tried out a mountain pass... 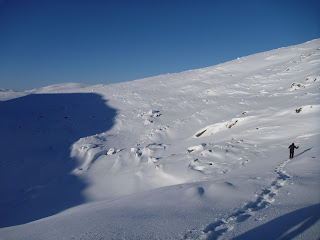 Hi Margot
You can read more about Dovregubben and my relationship to this character on my webpage
http://www.dovregubben.dk/dovregubben.html