I should just have googled it. I knew the Cornish mine explorers had some storage space somewhere called Poldark, but I never imagined that to be anything more spectacular than some shed. And then, one day, came a message: if people were willing to do some maintenance work at that mysterious Poldark place. It seemed that the club could store their stuff for free, in return for some help with cleaning or painting or repair or such things. And I quite enjoy the Cornish trips, so I decided to show up and do my thing. And Poldark, whatever it was, was on the map.

I arrived at a deserted parking lot. It did have a sign"Poldark Mine", but where was everybody else? What was going on? I thought I'd call one of the guys, but there was no signal. Then I saw somebody walk there. I approached the person: it was one of us! So I was at the right spot. Dave, for it was he (the Cornish Dave; any UK caving club seems to need at least two men called Dave) welcomed me, and showed me where the few other members were working. One guy was putting a metal collar on a shaft, and another one was painting a shed. While walking around there, I realised this was a tourist mine! (Look here!) I had no idea. It was quite nice; lots of equipment still in place, and some more displayed in convenient places, and lots of information plaques and whatnot. I should have known about this place!

I was asked to go and paint stuff as well. Fine with me! They picked a wall that was dry-ish, and brought out paint in several colours, and paint brushes, and sandpaper, and a ladder, and anything else I might need. And when I was done, it was lunch time. The Poldark people provided pork sandwiches and tea! I was really warming to the place. And after lunch, I moved to the gate. I managed to paint one section of it before time ran out. But I was glad to have showed up, and to have made a contribution! 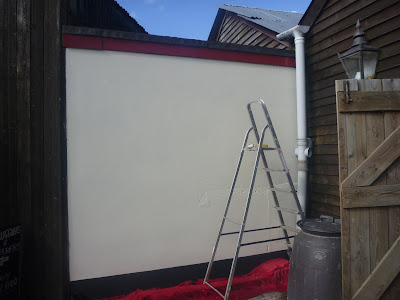 The first thing Dave had said when I met him was that he would show me around underground. So when I decided I was done painting (it was still a long drive home) I asked if he could do that. And he could! It was quite a pretty old mine. It had been active in the 18th Century. And he even came with a surprise: when we reached a small underground chamber, he declared "this is where I got married!" I hadn't seen that one coming.

When I left I felt bad about only having showed up one day. But it's about 3.5hrs driving to get there and back. It had been worth it though; and I hope I'll visit Poldark again! And for those who visit the Southwest: do visit it as well! And pay close attention to the white wall on your left that you pass when you leave, and the right section of the gate...
Posted by Margot at 15:55