Gay in Plymouth (and elsewhere)

When I lived in Amsterdam, the world was normal. When I went to Norway, something was missing. Gays! Or to be more politically correct: LGBT people. They must have been there! Why were they not seen by the untrained eye? And then I moved to England. The same story! Where are the gays? After four years I have met, as far as I am aware, only three people in that category. And what's worse; here in Plymouth, you meet a lot of casual homophobia. That bothers me.

The Dutch generally don't have a high regard for the level of gay rights in the UK, but I personally base that opinion on anecdote (no gay marriage, for instance) and personal experience. It's not as if I know much about the legal details or the historical background. And then there was a talk announced by Peter Tatchell. Peter who? Anglosaxons, I've noticed, know exactly who he is, but I hadn't heard of him. He turned out to be a British-Australian human rights activist. His focus is on LGBT issues, but he's campaigned for all sorts of other people at the receiving end of injustice. He would speak on the history of the gay rights movement in the UK. Of course I wanted to go!

The lecture theatre was practically full. One expects a higher percentage of gays in an audience like this than randomly on the street. So they do exist in Plymouth! And when Tatchell was introduced he got a warm applause. 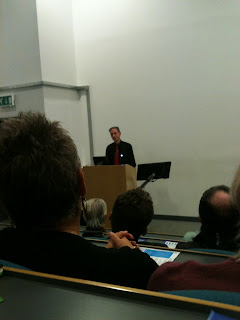 Not a very good picture, but I was too busy listening and taking notes!

He started off with the history of gay rights groups. He spoke of the early days; the fifties seem to have been a particularly bad time for, mainly, gay men. About a thousand men (gay sex among women seems not to have been illegal) were incarcerated for having gay sex every year. A famous one, I suppose as every Brit already knew (but not me), was Lord Montagu. Do read his story! All this inspired the foundation of the Homosexual Law Reform Society (HLRS) in '58. This was a London-based group of the rich and powerful, who thought something needed to change. Which was certainly the case, but the people which would benefit most from such reform didn't feel represented by this society. Enter the North-West Homosexual Law reform Committee (NWHLRC) ('64); this was a proper grassroots organisations that actually had gay people in it. And they had effect: a landmark moment in LGBT rights in the UK was the Sexual Offences Act of '67, which decriminalised homosexual acts. Under certain circumstances. Tatchell explained how restricted this still was: he said the only time (male) gay sex was not an offense was if it took place between two consenting 21+ males, in the privacy of their own home, with the doors and windows locked, the curtains drawn, and nobody else present in the premises. Facilitating or seeking such encounters, strangely enough, was still illegal. And it only held for England and Wales; Scotland followed in '80 and Northern Ireland in '82. It's better than gay sex being illegal at all times, but one has to agree that this is hardly equality.

Enter the 80s. Another bad time! Tatchell explained that in these times, about as many men were in prison for gay sex (under the moniker of nasty phrases as "unnatural offences" or "gross indecency") as in the 50s. In the 80s? Dearie me! And he even counted 50+ men being murdered for being gay in the period '86-'91with the police looking the other way. There clearly was more work to do! So another HLRS-NWHLRC-like set of organisations was founded; the former called Stonewall UK ('89), named after the '69 riots in New York, and the other one called Outrage! ('90). The endless list of organisations might put some people off, but it does matter. For instance, he mentioned that if you have a rather law-focussed, intellectual group, and a provocative, loud one, this might give the former more chances to be heard by the mainstream - rather that then deal with the latter! In Dutch there is a great word for that: relnichten (riot faggots? It's clearly a nom de guerre). I don't think they have such a phrase in English...

And progress was made: Outrage! organised a mass kiss-in on Piccadilly Circus in '90. And that raised such publicity, in a good way, even before the event even happened, that they received a letter from the police that they would stop arresting people for displaying gay acts of affection in public an hour before the kissing started. Success! And the police seem to have kept their word.

And then changes happened fast. Age of consent for gay men lowered in '94 and again in 2001, gays allowed into the army in 2000, sex involving more than two men decriminalised in 2001, the right to adopt introduced in 2002 and civil partnership in 2003, and discrimination against lesbians and gay men in the provision of goods and services illegal in 2007. And then in 2013, the House of Commons backed gay marriage. 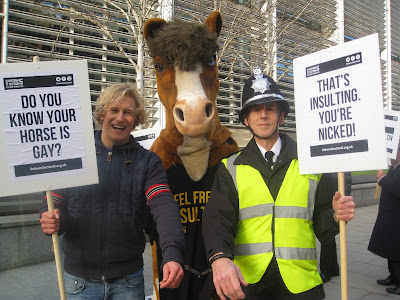 A somewhat unrelated picture I took from his website (with permission): here we see Tatchell (right) protest against "section 5" which allows the police to prosecute people for words and behaviour they (and not necessarily anybody else) deem insulting. The fancy dress refers to a chap who was arrested for asking a mounted policeman "Excuse me, do you realise your horse is gay?"

So are we there yet? No! For one thing. Tatchell explained that the opposition often supports gay causes, but forgets about that as soon as they gain power. He mentioned that Labour had pulled that trick. The only reason why serious changes were still implemented during their time in power was that individuals, disappointed with government decisions, would appeal to the European Court of Human Rights. And when they declare something unconstitutional (or otherwise wrong), the UK government has to give in. And now the UK is considering stepping out of the EU and distancing themselves from the ECoHR. If that happens, the UK can decide on policy on their own again. What would happen?

And gay marriage made it! Or has it? It passed through the House of Commons, but it still has to pass through the House of Lords. Not necessarily the most progressive body in the world. They probably won't dare block it, but they might cripple it with amendments. And why create a new law in the first place? The Marriage Act of '48 (or '49) does not state the two people engaged in the marriage have to be of opposite gender. That is only stated in the Matrimonial Causes Act from '73. Why not repeal that part of the '73 Act? Why need new legislation? Is that equality? And why can't straights get a civil partnership? Is that equality?

Asylum seekers who flee countries like Uganda where being (perceived as being) gay is still lethally dangerous sometimes flee to the UK, as things are so much better here. But then, at the border, their sexual orientation is questioned. The UK is trying very hard to reduce immigration, and this seems to be an easy way to contribute to that. And I had already heard disturbing reports on the radio that gay asylum seekers have started, in their despair, to tape themselves having sex in order to "prove" their orientation. Any less explicit evidence seems to to be taken seriously. Imagine that...

And last but not least; there are still high numbers of bullying of gays in schools and elsewhere in society. The LGBT community seems to have a three times higher occurrence of psychological problems and suicide than the general population. And well, with the levels of homophobia (will I get stick for using that term? Some claim it technically means "fear of similarities") you do routinely encounter in this country, I can believe that. The UK aren't there yet! But they've sure come a long way...
Posted by Margot at 09:07